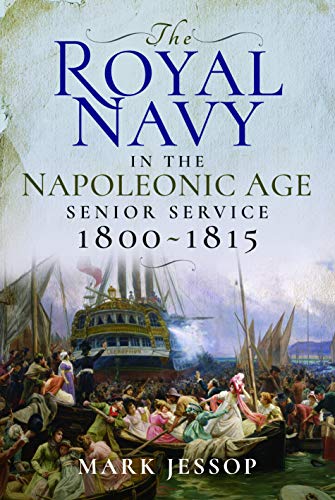 The Royal Navy in the Napoleonic Age
by Mark Jessop

Used Price
£12.99
New RRP £19.99
Free Shipping in the UK
When your foe is Napoleon Bonaparte and the United States of America, how do you win a war at sea? What made the British Royal Navy sail to success and maintain its status of senior service?
Very Good

The Royal Navy in the Napoleonic Age Summary

The Royal Navy in the Napoleonic Age: Senior Service, 1800-1815 by Mark Jessop

In 1801 the newly forged United Kingdom of Great Britain and Ireland commenced life at war with France and her allies and remained so until 1815. After 1812 she had to shoulder the extra burden of a war against the United States of America. With conflict on multiple fronts, hardships continued to be inflicted at home. Trade was made precarious. People became bone-weary of hostilities and the threat of invasion ran high. Napoleon Bonaparte was no ordinary opponent, and the United States navy showed the world the worth of her ships, but what stood in their way was the Royal Navy. Despite notable losses, after the victory of Trafalgar in 1805 she dominated the seas. Although not the only means, her warships were the nation's first line of defence that helped keep British shores safe. As the era ended it was obvious the navy had to change. Steam began to alter perspectives with new opportunities. From the vantage point of later decades it could be seen what the Royal Navy had once been and still was. A naval superpower. Britain's oldest continual military force. The senior service.

The Royal Navy in the Napoleonic Age Reviews

It takes us into areas that aren't always covered, and makes it stand out from the crowd of
Napoleonic Naval studies. The focus on Plymouth demonstrates the impact the wars could have
back in Britain, especially in the major ports, while the chose of characters means we spend most of
our time either on the lower decks, or getting the civilian view of the wars.-- "History of War"

GOR010839163
The Royal Navy in the Napoleonic Age: Senior Service, 1800-1815 by Mark Jessop
Mark Jessop
Used - Very Good
Hardback
Pen & Sword Books Ltd
2019-10-30
176
152672037X
9781526720375
N/A
Book picture is for illustrative purposes only, actual binding, cover or edition may vary.
This is a used book - there is no escaping the fact it has been read by someone else and it will show signs of wear and previous use. Overall we expect it to be in very good condition, but if you are not entirely satisfied please get in touch with us.