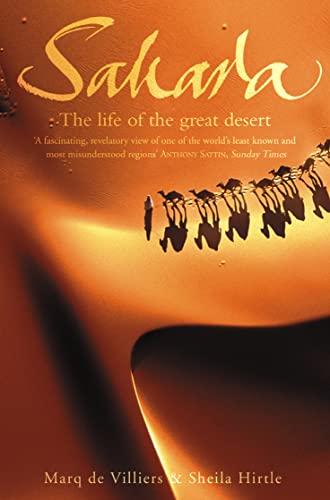 A glittering geographic tour of the remarkable history, peoples, climate, creatures, sights and sounds of the largest and most austere desert on earth.

Sahara: The Life of the Great Desert by Marq de Villiers

A glittering geographic tour of the remarkable history, peoples, climate, creatures, sights and sounds of the largest and most austere desert on earth.

Ten thousand years ago, the Sahara was a temperate grassland - petrified trees mark where forests used to stand, and former riverbeds are rich in the petrified bones of hippos, elephants, zebras and gazelles. Then a slight shift in the earth's axis transformed it into the greatest desert in the world with astonishing speed.

Massive sand dunes are continuously formed and dissolved by fierce winds, making the ever-shifting topography of the desert more uncertain and hazardous to navigate. The inhabitants of this desolate terrain barely eke out a living.

Throughout the millennia, diverse populations have struggled to make this severe landscape home. Marq de Villiers and Sheila Hirtle chronicle the desert's nations and peoples and legacies they have left to the sand: stone circles older than Stonehenge; Roman aqueducts; remnants of Greek fields and vineyards, and the ruins of palaces and temples along the Royal Road, a once busy trading route for gold and salt, resources that fuelled the economies of the great empires of Old Africa before centuries of conquests, religious wars and tribal turf battles destroyed them. Illuminated by written testimonies of past travellers, `Sahara' conveys the majesty, mystery and abundance of the desert's life in an evocative biography of the land and its people.

`A fascinating, revelatory view of what still remains one of the world's least known and most misunderstood regions' Anthony Sattin, Sunday Times

`It is the writers' experiences with the people of this wilderness, so well presented here, that inspire awe...Michael Palin may have sexed-up the Sahara in the tie-in to his TV programme, but this book is the more satisfying read.' Danny McElhinney, Ireland on Sunday

`A fascinating portrait of an extraordinary place.' Michael Kerrigan, Scotsman

`I felt a real affinity with de Villiers and Hirtle as I began their new biography of the desert...To do justice to a contemporary understand of this desert, its long history and complex geography, de Villiers and Hirtle have been thorough in their research. With...broad perspective, the authors weave together the ongoing life of a desert that is forever changing.' Nigel Winser, New Scientist

Marq de Villiers was born in South Africa and is the author of seven books on exploration, history, politics and travel, including Water: Our Most Precious Resource (which won Canada's prestigious Governor-Generals' Award), Down the Volga and Into Africa: A Journey Through the Ancient Empire, written with Sheila Hirtle. De Villiers and Hirtle live in Lunenburg, Nova Scotia.

GOR001145816
Sahara: The Life of the Great Desert by Marq de Villiers
Marq de Villiers
Used - Very Good
Paperback
HarperCollins Publishers
2004-02-16
336
0007148216
9780007148219
N/A
Book picture is for illustrative purposes only, actual binding, cover or edition may vary.
This is a used book - there is no escaping the fact it has been read by someone else and it will show signs of wear and previous use. Overall we expect it to be in very good condition, but if you are not entirely satisfied please get in touch with us.