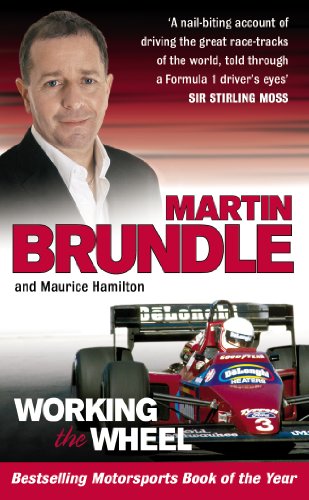 Working The Wheel
by Martin Brundle

In Stock
£5.49
In this unique book the reader will have his armchair converted to the laid-down cockpit of a Formula One car and be swept around the world's classic motor racing circuits.
Very Good Good
7 in stock

Working The Wheel by Martin Brundle

In this unique book the reader will have his armchair converted to the laid-down cockpit of a Formula One car and be swept around the world's classic motor racing circuits. He will experience the extraordinary sensations, the adrenaline and the atmosphere as told by the sport's best analyst. Together with F1's respected journalist, Maurice Hamilton, Brundle brings his infallible humour and insight, his experiences and opinion, to each of the circuits and its classic races. From the camber at Monaco, which will leave your wheels hanging in the air, to Melbourne and the dynamics behind the most dramatic crash of the decade. Encompassing such essential details as neck-snapping acceleration, smashing cars worth a quarter of a million, and the amount of sweat a driver will lose in a race, this is a rare F1 book - funny, opinionated, evocative and dramatic.

"A nail-biting account of driving the great race-tracks of the world, told through a Formula One driver's eyes" -- Sir Stirling Moss
"A pithy and entertaining account of motor racing as a professional driver" * Saturday Telegraph *
"A must for any F1 fan" * Sunday Express *
"Martin Brundle is by far and away the best grand prix commentator around ... Working the Wheel is a modern classic ... A must for serious race fans" * Car magazine *
"a fascinating look at his experiences in and out of the car. A must for any F1 fan" * Sunday Express *

Martin Brundle's 12-year F1 career gave him eight podium finishes. He is Director of the British Racing Driver's Club and shareholder in the Brundle motor dealerships in his Native Norfolk. He has received two Royal Society of Television Awards for his commentary. Maurice Hamilton has been a freelance writer of F1 for 25 years. He has won four awards and written 15 books including ghosting Damon Hill's bestselling account of his 1994 season. He is motor racing correspondent for the Observer and F1 commentator for Radio 5 Live.

GOR001121572
Working The Wheel by Martin Brundle
Martin Brundle
Used - Very Good
Paperback
Ebury Publishing
2005-10-06
320
0091900816
9780091900816
N/A
Book picture is for illustrative purposes only, actual binding, cover or edition may vary.
This is a used book - there is no escaping the fact it has been read by someone else and it will show signs of wear and previous use. Overall we expect it to be in very good condition, but if you are not entirely satisfied please get in touch with us.