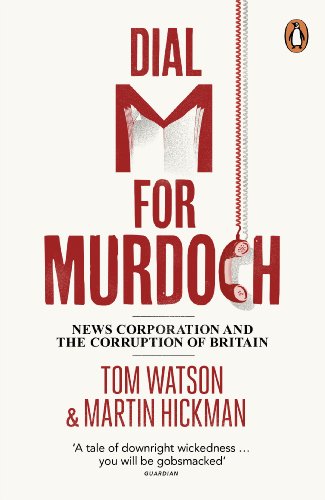 In Stock
£6.49
For years Rupert Murdoch's newspapers had been hacking, spying, blagging, bribing and destroying the evidence. They thought they were untouchable. They were wrong.
Very Good Good Well Read
9 in stock

Dial M for Murdoch: News Corporation and the Corruption of Britain by Martin Hickman

For years Rupert Murdoch's newspapers had been hacking, spying, blagging, bribing and destroying the evidence. They thought they were untouchable. They were wrong.

This is the book that exposed the shadow state at the heart of Britain. Now fully updated with the very latest in the News Corp scandal, it tells the story of how a criminal conspiracy involving politicians, the police and the press was revealed; the smears and threats they used to cover it up; the brave whistleblowers who cracked open the case - and what it now means for all of us.

Even if you are familiar with the News of the World phone-hacking saga, you will be gobsmacked by this account. It is a tale of stupidity, incompetence, lying, downright wickedness and corruption in high places. -- Peter Wilby * Guardian *
The authors weave the events of the past decade into a compulsive narrative that includes not only phone hacking but email interception, surveillance, burglary, cover-ups, political influence and - at its darkest - murder. Anyone who has lost track of what happened, or why it matters, should read this book -- Jonathan Heawood * Daily Telegraph *
A thriller on par with the legendary All the President's Men, the story of Rupert Murdoch's News Corporation and British phone hacking scandal makes for political drama at its finest... a gripping account that will likely be a go-to source in years to come. * Publishers Weekly *
I'm not planning on reading it. -- Rupert Murdoch

TOM WATSON is the MP for West Bromwich East. He campaigns against unlawful media practices and led the questioning of Rupert and James Murdoch when they appeared before Parliament in July 2011. He is the deputy chair of the Labour Party.

MARTIN HICKMAN has worked for the Independent since 2001, and has driven the paper's coverage of the phone hacking scandal. He was named Journalist of the Year by the Foreign Press Association in 2009.

GOR004713149
Dial M for Murdoch: News Corporation and the Corruption of Britain by Martin Hickman
Martin Hickman
Used - Very Good
Paperback
Penguin Books Ltd
2012-11-29
368
0241961041
9780241961049
N/A
Book picture is for illustrative purposes only, actual binding, cover or edition may vary.
This is a used book - there is no escaping the fact it has been read by someone else and it will show signs of wear and previous use. Overall we expect it to be in very good condition, but if you are not entirely satisfied please get in touch with us.