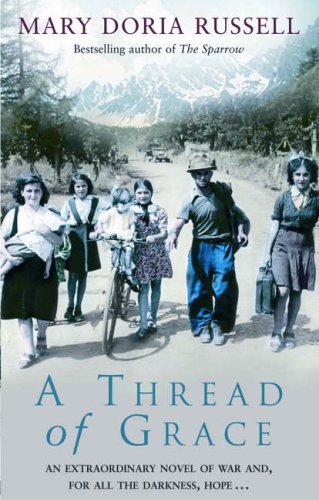 A Thread Of Grace
by Mary Doria Russell

In Stock
£2.99
8th September 1943, and Claudette Blum and her father are among thousands of Jewish refugees fleeing over the Alps towards Italy.
Very Good
Only 1 left

A Thread Of Grace Summary

A Thread Of Grace by Mary Doria Russell

8th September 1943, and Claudette Blum and her father are among thousands of Jewish refugees fleeing over the Alps towards Italy. For the Italians have broken with Hitler and sued for peace, and here the Blums hope to find safety at last. But overnight the Nazis seize control and the country becomes a battleground - for the occupying German forces, the advancing allies, partisans, Jews in hiding and ordinary Italians simply trying to survive. Against this dramatic backdrop and through the lives of a multitude of beautifully drawn characters - a mercurial resistance leader, a priest, an Italian rabbi and his family, and a disillusioned Wehrmacht doctor - Mary Doria Russell tells the little-known story of those who sought refuge in Italy during the final phase of the Second World War, and of those who risked all to help them. It is a powerful, profoundly moving novel.

A Thread Of Grace Reviews

A paleoanthropologist known for her work on cannibalism and craniofacial biomechanics, Mary Doria Russell is the author of the acclaimed novels The Sparrow and Children of God, which earned her a number of awards and have been translated into thirteen languages. She lives in Cleveland, Ohio, with her husband and their son. For more information on Mary Doria Russell and her books, see her website at www.marydoriarussell.info

GOR001122564
A Thread Of Grace by Mary Doria Russell
Mary Doria Russell
Used - Very Good
Paperback
Transworld Publishers Ltd
2006-01-02
512
0552772887
9780552772884
N/A
Book picture is for illustrative purposes only, actual binding, cover or edition may vary.
This is a used book - there is no escaping the fact it has been read by someone else and it will show signs of wear and previous use. Overall we expect it to be in very good condition, but if you are not entirely satisfied please get in touch with us.