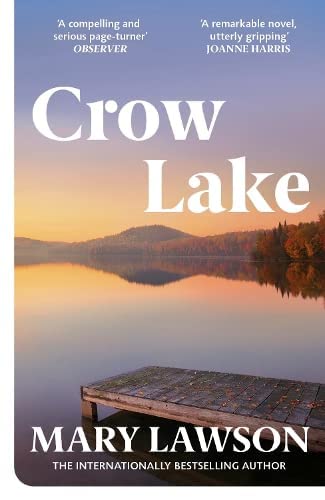 Crow Lake is that rare find, a first novel so quietly assured, so compelling, and with an emotional charge so perfectly controlled, that you sense at once that this is the real thing - a literary experience to relish, a book to lose yourself in, and a name to watch.

Crow Lake is that rare find, a first novel so quietly assured, so compelling, and with an emotional charge so perfectly controlled, that you sense at once that this is the real thing - a literary experience to relish, a book to lose yourself in, and a name to watch.

Here is a gorgeous, slowburning story of families growing up and tearing each other apart in rural Northern Ontario, where tragedy and hardship are mirrored in the landscape. Centre stage are the Morrisons whose tragedy is insidious and divisive. Orphaned young, Kate Morrison was her older brother Matt's protegee, her curious fascination for pond-life fed by his passionate interest in the natural world. Now a zoologist, she can identify organisms under a microscope, but seems blind to the tragedy of her own emotional life. She thinks she's outgrown her family, who were once her entire world - but she can't seem to outgrow her childhood or lighten the weight of their mutual past.

Beautifully written, carefully balanced, Mary Lawson constructs a history of sacrifice, emotional isolation and family love without sounding a false note * Daily Mail *
Full of blossoming insights and emotional acuity...a compelling and serious page-turner * Observer *
Lawson's evocative storytelling...knows just how to draw the reader on...this is a novel of disappointed hopes and self-delusion, but it has a feel-good finish. Move over Lake Wobegon * Spectator *
A novel of a darkly unpredictable and compelling kind. It is a wise book * Financial Times *

Mary Lawson is a Canadian author. Her first novel, Crow Lake (2002), is a tense and heart-breaking drama of family love and buried resentment set in rural Ontario, carefully crafted and sparkling with humour, which won the 2003 McKitterick Prize. Her second novel, The Other Side of the Bridge (2006), is the compelling and vivid story of two generations of a family who are tragically torn apart by the Second World War, which was longlisted for the Man Booker Prize that year and selected for the Richard and Judy book club. Her most recent novel, Road Ends (2013), tells the enthralling tale of the Cartwright family unravelling in the aftermath of a tragedy, set against the chilling backdrop of a frozen landscape in the first half of the 20th century.

GOR010566413
Crow Lake by Mary Lawson
Mary Lawson
Used - Like New
Paperback
Vintage Publishing
2003-02-03
352
0099429322
9780099429326
Winner of McKitterick Prize 2003
Book picture is for illustrative purposes only, actual binding, cover or edition may vary.
The book has been read, but looks new. The book cover has no visible wear, and the dust jacket is included if applicable. No missing or damaged pages, no tears, possible very minimal creasing, no underlining or highlighting of text, and no writing in the margins.