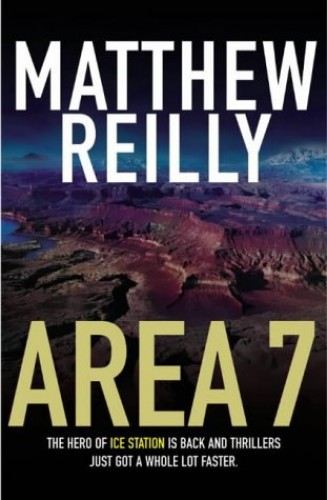 It is America's most secret base, hidden deep in the Utah desert, an Air Force installation known only as Area 7. And today it has a visitor: the President of the United States. He has come to inspect Area 7, to examine its secrets for himself. But he's going to get more than he bargained for on this trip. Because hostile forces are waiting inside...

Among the President's helicopter crew, however, is a young Marine. He is quiet, enigmatic, and he hides his eyes behind a pair of silver sunglasses. His name is Schofield. Call-sign: SCARECROW. Rumour has it, he's a good man in a storm. Judging by what the President has just walked into, he'd better be...

The President is visiting Area 7, America's most secret base hidden deep in the Utah desert - but hostile forces are waiting inside. However, amongst the President's helicopter crew is the young marine Shane Schofield, hero of Ice Station and Temple. A third high voltage adventure thriller from the bestselling Australian writer.

Matthew Reilly was born in Sydney in 1974 and studied Law at the University of New South Wales. He has written both both screenplays and magazine articles, and recently optioned the film rights to his first novel, Contest. His second and third novels, Ice Station and Temple, became No. 1 bestsellers in his native Australia, and went on to enjoy huge success internationally. The author still lives in Sydney, and keeps on writing.

GOR000690550
Area 7 by Matthew Reilly
Matthew Reilly
The Scarecrow series
Used - Very Good
Paperback
Pan Macmillan
2002-07-05
596
0330487582
9780330487580
N/A
Book picture is for illustrative purposes only, actual binding, cover or edition may vary.
This is a used book - there is no escaping the fact it has been read by someone else and it will show signs of wear and previous use. Overall we expect it to be in very good condition, but if you are not entirely satisfied please get in touch with us.