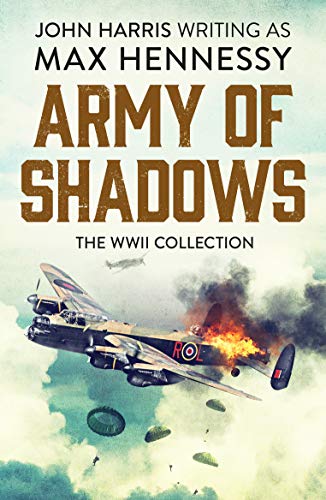 Army of Shadows by Max Hennessy

Army of Shadows: The WWII Collection by Max Hennessy

They fought without glory - and without mercy.

France, Winter 1944: The long-awaited liberation is at hand

The bombing missions had gone well, and the crew of the Lancaster bomber had begun to relax. Then the Messerschmitt came out of the darkness, its guns blazing.

Of the nine-man crew only Neville and Urqhart survive, parachuting into the heart of occupied France. Joining forces with the men of the French Resistance, they must enter a deadly game of cat and mouse with a ruthless enemy...

A nerve-shredding thriller of the Second World War, steeped in historical research, perfect for fans of Alistair MacLean, Jack Higgins and Wilbur Smith.

Max Hennessy was the pen-name of John Harris. He had a wide variety of jobs from sailor to cartoonist and became a highly inventive, versatile writer. In addition to crime fiction, Hennessy was a master of the war novel and drew heavily on his experiences in both the navy and air force, serving in the Second World War. His novels reflect the reality of war mixed with a heavy dose of conflict and adventure.

GOR011232096
Army of Shadows: The WWII Collection by Max Hennessy
Max Hennessy
Used - Like New
Paperback
Canelo
2020-10-15
384
1800320108
9781800320109
N/A
Book picture is for illustrative purposes only, actual binding, cover or edition may vary.
The book has been read, but looks new. The book cover has no visible wear, and the dust jacket is included if applicable. No missing or damaged pages, no tears, possible very minimal creasing, no underlining or highlighting of text, and no writing in the margins
Trustpilot