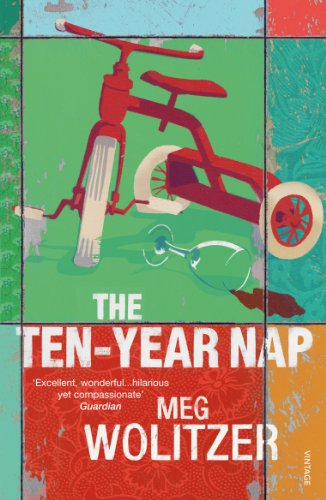 The Ten-Year Nap
by Meg Wolitzer

In Stock
£4.49
For a group of four New York friends, the past ten years have been defined by marriage and motherhood. Illicit affairs, money problems, issues with children and husbands all rear their heads, and the friends wonder if it's time for a change...
Very Good Good Well Read
Only 4 left

The Ten-Year Nap by Meg Wolitzer

For a group of four New York friends, the past ten years have been defined by marriage and motherhood. Educated to believe that they and their generation would conquer the world, they nonetheless left high-powered jobs to stay at home with their babies. What was intended as a temporary time-out has turned into a decade. Now at forty, with their kids growing up, Amy, Jill, Roberta and Karen wake up to a life and a future that is not what they intended. Illicit affairs, money problems, issues with children and husbands all rear their heads, and the friends wonder if it's time for a change...

"What comes after chick-lit? Mum-lit, perhaps - but tales of hyper-active kids, moribund marriages and the career opportunities that got away will seldom match Wolitzer's wit, bite and schmaltz-free sympathy" * Independent *
"This one shouldn't be only for chicks. It's for everyone. It asks far-reaching questions about the place of women in society and within the family unit, but it asks also whether life has been fair to men" * Daily Telegraph *
"The latest novel from the excellent Meg Wolitzer presents four New York mothers emerging from a decade in babyland... a wonderful study of muddy equivocation, a hilarious yet compassionate examination of the primordial slime and the modern woman" * Guardian *
"Terrific... Wolitzer's novels have always been exemplars of the motto that the personal is political... [Offers] many pleasing, surprising contrasts" * The Times *
"It made me think about a woman's eternal problem of balancing the love she has for her children with what to do when they finally leave home. A serious, meaty read" * Essentials *

Meg Wolitzer is the author of several acclaimed novels, The Wife ('has you howling with recognition' Allison Pearson), The Position ('one of the best and most human books I've read all year' Erica Wagner) and The Uncoupling. She is married with two sons and lives in New York City.

GOR001106893
The Ten-Year Nap by Meg Wolitzer
Meg Wolitzer
Used - Very Good
Paperback
Vintage Publishing
2009-07-02
352
0099523485
9780099523482
N/A
Book picture is for illustrative purposes only, actual binding, cover or edition may vary.
This is a used book - there is no escaping the fact it has been read by someone else and it will show signs of wear and previous use. Overall we expect it to be in very good condition, but if you are not entirely satisfied please get in touch with us.