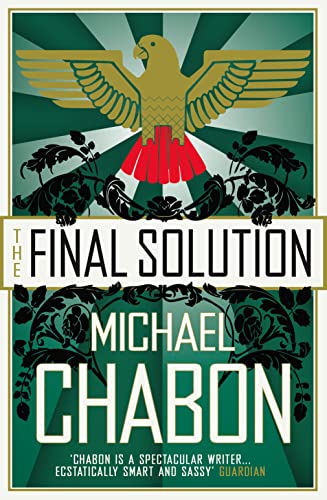 The Final Solution
by Michael Chabon

A brilliant reworking of the detective story by the much-acclaimed Michael Chabon, author of the Pulitzer Prize-winning THE AMAZING ADVENTURES OF KAVALIER & KLAY.

The Final Solution by Michael Chabon

A brilliant reworking of the detective story by the much-acclaimed Michael Chabon, author of the Pulitzer Prize-winning THE AMAZING ADVENTURES OF KAVALIER & KLAY.

In THE FINAL SOLUTION, Michael Chabon has crafted a short, suspenseful tale of compassion and wit that reimagines the classic 19th-century detective story.

In deep retirement in the English countryside, an 89-year-old man, vaguely remembered by locals as a once-famous detective, is more concerned with his beekeeping than with other people. Into his life wanders Linus Steinman, nine years old and mute, who has escaped from Nazi Germany with his sole companion: an African grey parrot. What is the meaning of the mysterious strings of German numbers the bird spews out? A top-secret SS code? The keys to a series of Swiss bank accounts perhaps? Or something more sinister?

Is the solution to this last case - the real explanation of the mysterious boy and his parrot - beyond even the reach of the once-famed sleuth? Subtle revelations lead the reader to a wrenching resolution. This brilliant homage is the work of a master storyteller at the height of his powers.

`It takes a steady hand to appropriate the world's most famous detective, but Chabon has chutzpah to spare.' Independent

`Chabon gives the reader a tantalising taste of what he's capable of.' Andrew Roberts, New Statesman

`Chabon's gift as a writer is the fatal facility to make anything pleasant in the telling, and "The Final Solution" is further evidence of that talent.' Daily Telegraph

`His thoughtful, intricate prose pays handsome tribute to all those `tec stories and sleuth yarns..."The Final Solution" is an evocation of the addictive properties of detection and an elegy for its glory days.' Word Magazine

`On par with the best, most tightly written sections of Chabon's last novel, the marvelous "The Amazing Adventures of Kavalier & Clay"...exceptional.' New York Times Book Review

`One of the best-written American novels published this fall... an experiment by a master.' The New York Sun

GOR001198107
The Final Solution by Michael Chabon
Michael Chabon
Used - Very Good
Paperback
HarperCollins Publishers
2005-12-10
128
0007196032
9780007196036
N/A
Book picture is for illustrative purposes only, actual binding, cover or edition may vary.
This is a used book - there is no escaping the fact it has been read by someone else and it will show signs of wear and previous use. Overall we expect it to be in very good condition, but if you are not entirely satisfied please get in touch with us.