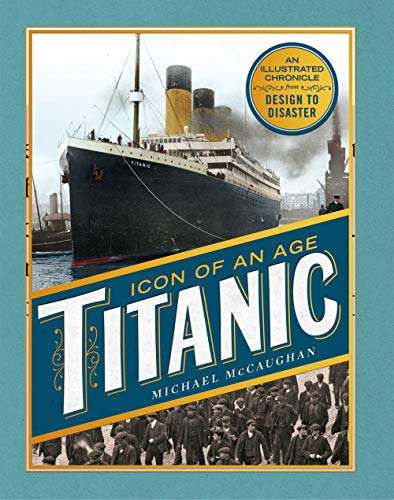 On 2 April 1912, Titanic left Belfast for the last time, sailing from the Harland and Wolff shipyard to Southampton. Just under two weeks later, the ship plunged through two miles of freezing water to the ocean floor, and more than 1,500 people lost their lives.

Titanic: Icon of an Age by Michael McCaughan

Titanic was not only a ship that embodied technological achievement; she was a microcosm of western civilisation and its misplaced certainties in a gilded age before World War 1.

She was the second of an intended trio of huge passenger vessels built by Harland and Wolff for the White Star Line's premier service between Southampton and New York. When she sank, 1,500 of the 2,201 people on board lost their lives and the news caused shockwaves around the world.

Titanic: Icon of an Age is a comprehensive and richly illustrated chronicle of the great liner and her time. Over 250 stunning images - some never published before - combine with a wealth of Titanic facts, memorabilia and Michael McCaughan's accessible and authoritative text to give a detailed and evocative impression of the period and the world-famous ship.

Written and published in Belfast, the birthplace of the great lost ship and home of Titanic Belfast (the unique museum and discovery centre), this book is a vivid exploration of Titanic in its era and a compelling testament to a story that continues to reverberate across time.

This definitive book from Titanic's homeland is an exciting, moving and richly ilustrated account of Titanic's remarkable story. A fitting tribute to this iconic ship.

a book which anyone with an interest in Titanic will want to have ... a fine volume

Michael McCaughan is the former Head of Transport, National Museums Northern Ireland. As a curator at the Ulster Folk and Transport Museum for over forty years, his research has focused mainly on the study and interpretation of Irish maritime history and traditions. He has published widely and is recognised internationally for his expertise and pioneering work on the history and culture of Harland & Wolff, the White Star line and theTitanic. Michael is the author of the groundbreaking book, The Birth of the Titanic (Blackstaff Press, 1998) and Titanic: Icon of an Age (2012).