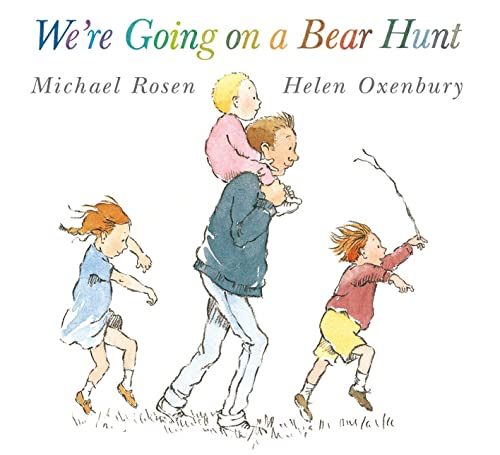 We're Going on a Bear Hunt
by Michael Rosen

In Stock
£3.59
For brave hunters and bear-lovers, the classic chant-aloud by Michael Rosen and Helen Oxenbury.
Very Good Good Well Read
131 in stock

We're Going on a Bear Hunt by Michael Rosen

For brave hunters and bear-lovers, the classic chant-aloud by Michael Rosen and Helen Oxenbury.

Follow and join in the family's excitement as they wade through the grass, splash through the river and squelch through the mud in search of a bear. What a surprise awaits them in the cave on the other side of the dark forest!

Beautifully produced, written and illustrated, this is a classic work for any age at any period. * The Independent on Sunday *
With such a partnership, how can this gorgeous great picture-book rhyme fail? * The Guardian *
Lovely to read aloud and beautiful to look at. * The Sunday Times *
"It's a special book and it just never gets old." * Gurgle *
"This contains adventure, companionship and good, old-fashioned fun." * The Sun *

Michael Rosen is one of the most popular authors of stories and poems for children. His bestselling titles, published by Walker Books, include Little Rabbit Foo Foo, Michael Rosen's Sad Book, This Is Our House, Tiny Little Fly, Dear Mother Goose and its sequel Dear Fairy Godmother. Michael received the Eleanor Farjeon Award in 1997, and was the Children's Laureate from 2007 to 2009. He is a distinguished critic and academic, co-directing an MA in Children's Literature at Birkbeck College. Michael lives in London, N10, with his family.

GOR000857751
We're Going on a Bear Hunt by Michael Rosen
Michael Rosen
Used - Very Good
Paperback
Walker Books Ltd
1993-09-16
40
0744523230
9780744523232
Winner of Smarties Book Prize 0-5 Category 1989 Winner of Smarties Book Prize Overall Winner 1989
Book picture is for illustrative purposes only, actual binding, cover or edition may vary.
This is a used book - there is no escaping the fact it has been read by someone else and it will show signs of wear and previous use. Overall we expect it to be in very good condition, but if you are not entirely satisfied please get in touch with us.