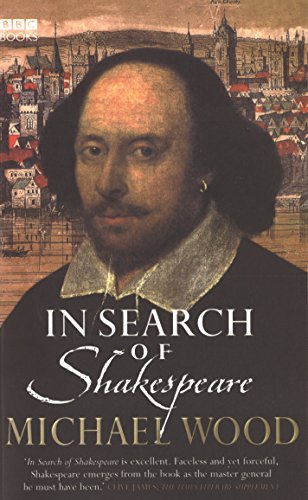 In Search Of Shakespeare
by Michael Wood

In Stock
£6.49
Almost 400 years after his death, William Shakespeare is still acclaimed as the world's greatest writer, and yet the man himself remains shrouded in mystery.
Very Good Good
5 in stock

In Search Of Shakespeare Summary

In Search Of Shakespeare by Michael Wood

Almost 400 years after his death, William Shakespeare is still acclaimed as the world's greatest writer, and yet the man himself remains shrouded in mystery. In this absorbing historical detective story, the acclaimed broadcaster and historian Michael Wood takes a fresh approach to Shakespeare's life, brilliantly recreating the turbulent times through which the poet lived: the age of the Reformation, the Spanish Armada, the Gunpowder Plot and the colonization of the Americas. Drawing on an extensive range of sources, Michael Wood takes us back into Elizabethan England to reveal a man who is the product of his time - a period of tremendous upheaval that straddled the medieval and modern worlds. Using a wealth of unexplored archive evidence the author vividly conjures up the neighbourhoods of the Elizabethan London where Shakespeare lived and worked during his glittering career. Full of fresh insights and fascinating new discoveries, this book presents us with a Shakespeare for the twenty-first century: a man of the theatre, a thinking artist, playful and cunning who held up a mirror to his age, but who was also, as his friend Ben Jonson said, 'not of an age, but for all time'.

In Search Of Shakespeare Reviews

"Wood's is an honest, well-organised account that will serve the reader well." * Independent on Sunday *
"Thanks to the author's gifts of story-teller, populariser and interpreter, Shakespeare's world is brought to life more vividly than in any other biography of him I have read. All the latest professional scholarship on the question on Shakespeare and Catholicism is effectively incorporated in the book, but where Wood has made genuine finds of his own is in the area of the dramatist's day-to-day life." * Sunday Telegraph *
"In this enthralling book Michael Wood evokes the physical and intellectual environment in which Shakespeare lived and worked with vivid and original immediacy." -- Professor Stanley Wells, Editor of The Oxford Shakespeare
"Wood is a perceptive, entertaining and enthusiastic companion." * Sunday Times *
"Shakespeare emerges from the book as the master general he must have been." -- Clive James * Times Literary Supplement *

Michael Wood was born in Manchester and educated at Manchester Grammar School and Oriel College, Oxford, where he did post-graduate research in Anglo-Saxon history. A broadcaster and film-maker, he is the author of several highly praised books on English history, including In Search of the Dark Ages, Domesday and recently In Search of England. He has over eight documentary films to his name, including Art of the Western World, Legacy, In the Footsteps of Alexander the Great and the highly acclaimed Conquistadors. The writer behind three BBC films about Shakespeare's early history plays, he was a contributor to Shakespearean Perspective (1985). Michael Wood is a fellow of the Royal Historical Society.

GOR001155032
In Search Of Shakespeare by Michael Wood
Michael Wood
Used - Very Good
Paperback
Ebury Publishing
2001-01-01
416
0563521414
9780563521419
N/A
Book picture is for illustrative purposes only, actual binding, cover or edition may vary.
This is a used book - there is no escaping the fact it has been read by someone else and it will show signs of wear and previous use. Overall we expect it to be in very good condition, but if you are not entirely satisfied please get in touch with us.