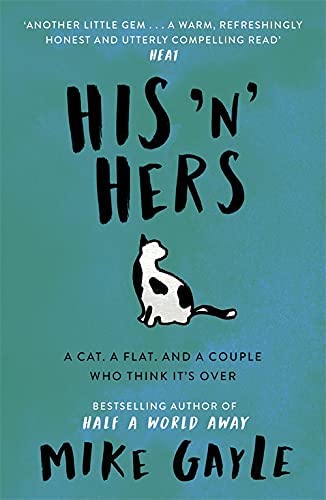 His 'n' Hers
by Mike Gayle

In Stock
£4.49
The brilliant new romantic comedy from No. 1 bestseller Mike Gayle.
Very Good
8 in stock

His 'n' Hers Summary

His 'n' Hers by Mike Gayle

A brilliant romantic comedy for fans of Bridget Jones's Diary.

A cat. A flat. And a couple who think it's over.

From their first meeting at the student union over a decade ago, Jim and Alison successfully navigated their way through first dates, meeting parents, moving in together and more . . . Then they split up and divided their worldly goods (including a sofa, a cat and their flat) into his 'n' hers.

Now, three years on and with new lives and new loves, they couldn't be happier. Until a chance encounter throws them back together, and causes them to embark on a journey through their past to ask themselves the big question: where did it all go wrong, and is it too late to put it all right?

His 'n' Hers Reviews

'If you've ever been in a relationship and wondered what the other person was thinking, you'll find this a warm, refreshingly honest and utterly compelling read' Heat on HIS N HERS
'The male Bridget Jones' - Express
'Full of belly-laughs and painfully acute observations' - Independent on Sunday on MY LEGENDARY GIRLFRIEND
'Something near to mid-period Woody Allen...funny and clever...refreshing to find a male writer working in this genre' - Guardian on MR COMMITMENT
'A warm, funny romantic comedy' - Daily Mail on TURNING THIRTY
'Ever wished you could see into the male mind? Here's your chance . . . Insightful and hugely witty.' Cosmopolitan on HIS 'N' HERS

Previously an Agony Uncle, Mike Gayle is a freelance journalist who has contributed to a variety of magazines including FHM, Sunday Times Style and Cosmopolitan. He is the author of four previous novels, the bestselling MY LEGENDARY GIRLFRIEND, MR COMMITMENT, TURNING THIRTY and DINNER FOR TWO.

GOR000298446
His 'n' Hers by Mike Gayle
Mike Gayle
Used - Very Good
Paperback
Hodder & Stoughton General Division
2005-01-31
368
0340825383
9780340825389
N/A
Book picture is for illustrative purposes only, actual binding, cover or edition may vary.
This is a used book - there is no escaping the fact it has been read by someone else and it will show signs of wear and previous use. Overall we expect it to be in very good condition, but if you are not entirely satisfied please get in touch with us.