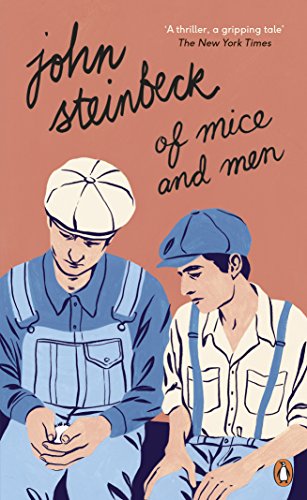 Of Mice and Men
by Mr John Steinbeck

Of Mice and Men Summary

Of Mice and Men by Mr John Steinbeck

'Guys like us, that work on ranches, are the loneliest guys in the world. They got no family. They don't belong no place.'

George and his large, simple-minded friend Lennie are drifters, following wherever work leads them. Arriving in California's Salinas Valley, they get work on a ranch. If they can just stay out of trouble, George promises Lennie, then one day they might be able to get some land of their own and settle down some place. But kind-hearted, childlike Lennie is a victim of his own strength. Seen by others as a threat, he finds it impossible to control his emotions. And one day not even George will be able to save him from trouble.

Of Mice and Men is a tragic and moving story of friendship, loneliness and the dispossessed, with a stunning new cover by renowned artist Bijou Karman.

Customer Reviews - Of Mice and Men

Of Mice and Men Reviews

A thriller, a gripping tale that you will not set down until it is finished. Steinbeck has touched the quick * New York Times *
A short tale of much power and beauty. Mr. Steinbeck has contributed a small masterpiece to the modern tough-tender school of American fiction * Times Literary Supplement *
Brutality and tenderness mingle in these strangely moving pages. . . The reader is fascinated by a certainty of approaching doom. * Chicago Tribune *

John Steinbeck (1902-68) is remembered as one of the greatest and best-loved American writers of the twentieth century. During the 1930s, his works included The Red Pony, Pastures of Heaven, Tortilla Flat, In Dubious Battle, and Of Mice and Men. The Grapes of Wrath, published in 1939, earned him a Pulitzer Prize. In 1962, he was awarded the Nobel Prize for Literature.