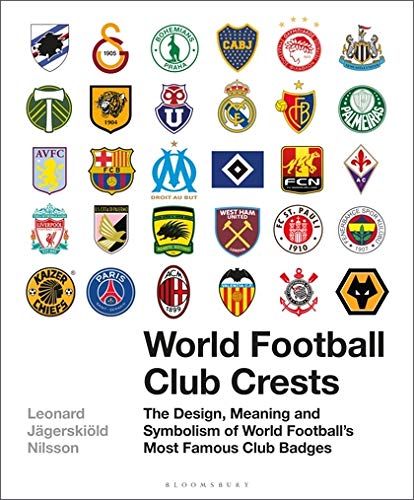 In Stock
£19.99
An illustrated exploration of the design, meaning and symbolism of world football club crests.
New£19.99
5 in stock

An illustrated exploration of the design, meaning and symbolism of world football club crests. Why is there a devil shown on the crest of Manchester United? Which club's crest motto is 'To Dare Is To Do'? And whose emblem depicts a bear and a strawberry tree? From the seahorses of Newcastle United to the royal crown of Real Madrid, via the riveting hammers of West Ham United, Valencia's famous bat design and German club St Pauli's unofficial skull-and-crossbones emblem, there is a story behind every crest, a tale of identity. Covering more than 200 clubs from 20 different leagues, World Football Club Crests explores the design, meaning and symbolism of the game's most famous club crests to reveal why the badges look as they do. This carefully curated collection charts the continuing evolution of the designs and describes the changing styles, varied influences and remarkable controversies that have shaped football's most iconic crests. These important symbols of football heraldry will never be viewed in the same way again.

Explores the meaning behind the badges of 200 clubs from across the world. * Daily Mail *
Uncovers badges through the ages of football teams from around the world. * Daily Star *
This is lovely -- Miguel Delaney * The Independent *
a masterpiece for people interested in design and who are passionate about football... [a] must for football and design lovers. * SvD (Swedish Newspaper) *
One of the best sports books of the year... A nerdy book made with a lot of love and knowledge * SVT 1 (Swedish television) *

Leonard Jagerskioeld Nilsson is a Swedish sports journalist who has worked as a producer for the Eurosport and Discovery networks. He has covered the UEFA Champions League, Premier League, Bundesliga, Serie A, La Liga and Ligue 1.

NGR9781472954251
World Football Club Crests: The Design, Meaning and Symbolism of World Football's Most Famous Club Badges by Mr Leonard Jagerskioeld Nilsson
Mr Leonard Jagerskioeld Nilsson
New
Hardback
Bloomsbury Publishing PLC
2018-11-15
256
1472954254
9781472954251
N/A
Book picture is for illustrative purposes only, actual binding, cover or edition may vary.
This is a new book - be the first to read this copy. With untouched pages and a perfect binding, your brand new copy is ready to be opened for the first time.