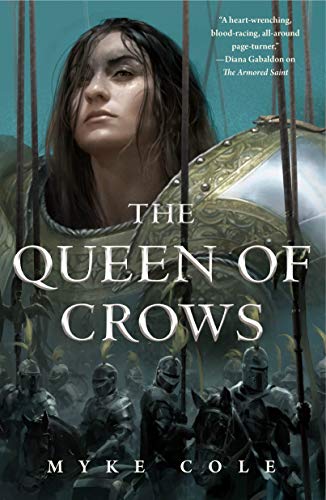 The Queen of Crows
by Myke Cole

The Queen of Crows Summary

The Queen of Crows by Myke Cole

The Queen of Crows, book two of the Sacred Throne Trilogy, continues the epic story of Heloise as she continues her journey from obscurity to greatness. Despite the crippling injuries she's received, Heloise stands tall against overwhelming odds with the help of alchemically-empowered armor and an unbreakable spirit. Heloise has grown from a shell-shocked girl into a figure of revolution, and as she draws in allies, her cause grows ever stronger. The time for hiding underground is over. Heloise must face the tyrannical Order and lay siege to the Imperial Palace itself.

Customer Reviews - The Queen of Crows

The Queen of Crows Reviews

A heart-wrenching, blood-racing, all-around page-turner. Spare, vivid and surprisingly sensual, with a small, fierce heroine who will stick in your mind and live in your soul.--Diana Gabaldon on The Armored Saint

"A dark fantasy tale with sharp teeth and a hard punch. Heloise is the hero we need, and Myke Cole is the writer to bring her transformation to light." --Chuck Wendig

Heloise is a wonderfully complicated character, and her unique dilemma will endear her to readers. The society that Cole creates in the book is unlike any other. --Booklist, starred review

MYKE COLE is a devoted comic fan and voracious fantasy reader who never misses his weekly game night. His fandoms range from Star Wars to military history. He's a former kendo champion and heavy weapons fighter in the Society for Creative Anachronism. At the D&D table, he always plays paladins. After a career hunting people in the military, police, and intelligence services, Myke put these skills to good use on CBS's hit show Hunted. Author of the Shadow Ops series and the Sacred Throne Trilogy, which began with The Armored Saint, Myke lives in Brooklyn, New York.

GOR009651598
The Queen of Crows by Myke Cole
Myke Cole
Used - Very Good
Hardback
Tor.Com
2018-10-02
256
0765395975
9780765395979
N/A
Book picture is for illustrative purposes only, actual binding, cover or edition may vary.
This is a used book - there is no escaping the fact it has been read by someone else and it will show signs of wear and previous use. Overall we expect it to be in very good condition, but if you are not entirely satisfied please get in touch with us.