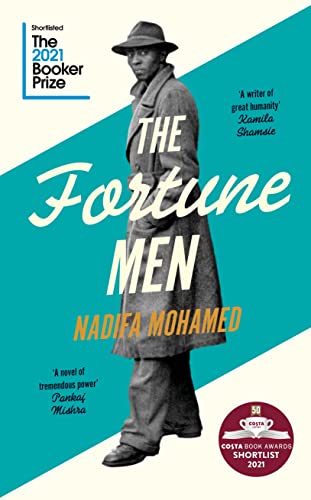 The Fortune Men by Nadifa Mohamed

The Fortune Men by Nadifa Mohamed

'Chilling and utterly compelling, The Fortune Men shines an essential light on a much-neglected period of our national life' Sathnam Sanghera, author of Empireland

Mahmood Mattan is a fixture in Cardiff's Tiger Bay, 1952, which bustles with Somali and West Indian sailors, Maltese businessmen and Jewish families. He is a father, chancer, some-time petty thief. He is many things, in fact, but he is not a murderer.

So when a shopkeeper is brutally killed and all eyes fall on him, Mahmood isn't too worried. It is true that he has been getting into trouble more often since his Welsh wife Laura left him. But Mahmood is secure in his innocence in a country where, he thinks, justice is served.

It is only in the run-up to the trial, as the prospect of freedom dwindles, that it will dawn on Mahmood that he is in a terrifying fight for his life - against conspiracy, prejudice and the inhumanity of the state. And, under the shadow of the hangman's noose, he begins to realise that the truth may not be enough to save him.

'A writer of great humanity and intelligence. Nadifa Mohamed deeply understands how lives are shaped both by the grand sweep of history and the intimate encounters of human beings' Kamila Shamsie, author of Home Fire

A writer of great humanity and intelligence. Nadifa Mohamed deeply understands how lives are shaped both by the grand sweep of history and the intimate encounters of human beings -- Kamila Shamsie, author of Home Fire
Chilling and utterly compelling, The Fortune Men shines an essential light on a much-neglected period of our national life -- Sathnam Sanghera, author of Empireland
The Fortune Men describes how innocence is forced to justify itself before gross injustice. A novel of tremendous power, compassion and subtlety, it feels unsettlingly timely -- Pankaj Mishra
In her determined, nuanced and compassionate exposure of injustice, Mohamed gives the terrible story of Mattan's life and death meaning and dignity * Guardian *
The Fortune Men confirms Mohamed as a literary star of her generation. When Mohamed's prose - simple and full of soul - illuminated him, Mahmood emerges as a beacon of humour, hope and endurance * Observer *
The Fortune Men is a novel on fire, a restitution of justice in prose * FT *
The Fortune Men is that rare novel that breaks your heart and, in so doing, gives you life. Nadifa Mohamed is a revelation - she writes with the fierce compassionate lightning of a truth-teller, lays bare the ghastly colonial condition that afflicts so many of us, where truth cannot overcome injustice. If a novel can be an avenger then The Fortune Men is the one we've all been waiting for -- Junot Diaz
A moving and captivating tale of survival and hope in a war-torn country, and confirms Mohamed's stature as one of Britain's best young novelists * Stylist on The Orchard of Lost Souls *
It's unbearably wrenching . . . Mohamed makes the outrage at the book's heart blazingly unignorable by inhabiting Mattan's point of view, a bold endeavour pulled off to powerful effect. Passages from the barbaric climax are still echoing in my head, even as I type * Daily Mail *
Mixing startling lyricism and sheer brutality, this is a significant, affecting book * Guardian, on Black Mamba Boy *
Just as Half of a Yellow Sun drew out the little documented dramas of the Biafran war, Mohamed describes an East Africa under Mussolini's rule . . . such an accomplished first novel * Independent, on Black Mamba Boy *
A first novel of elegance and beauty... a stunning debut * The Times, on Black Mamba Boy *
A haunting and intimate portrait of the lives of women in war-torn Somalia * New York Journal of Books, on The Orchard of Lost Souls *
With the unadorned language of a wise, clear-eyed observer, Nadifa Mohamed has spun an unforgettable tale * Taiye Selasi, on The Orchard of Lost Souls *
Nadifa Mohamed was born in 1981 in Hargeisa, Somaliland. At the age of four she moved with her family to London. She is the author of Black Mamba Boy, The Orchard of Lost Souls and, most recently, The Fortune Men. She has received both The Betty Trask Award and the Somerset Maugham Award, as well as numerous other prize nominations, for her fiction. She was named as one of Granta's Best of Young British Novelists in 2013. She contributes regularly to the Guardian and the BBC.
NGR9780241466940
9780241466940
0241466946
The Fortune Men by Nadifa Mohamed
Nadifa Mohamed
New
Hardback
Penguin Books Ltd
20210527
384
null null null null null null null null null null
Book picture is for illustrative purposes only, actual binding, cover or edition may vary.
This is a new book - be the first to read this copy. With untouched pages and a perfect binding, your brand new copy is ready to be opened for the first time
Trustpilot