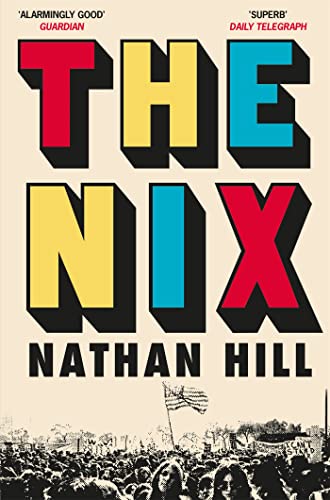 The Nix
by Nathan Hill

Used Price
£5.19
New RRP £9.99
Free Shipping in the UK
The instant New York Times No. 5 bestseller, a gloriously ambitious, witty and deeply touching debut novel of fifty years of America and of American radical protest, the story of a son, the mother who left him as a child, and how his search to uncover the secrets of her life leads him to reclaim his own.
Reviews:
Trustpilot
Like New Very Good Good Well Read

The Nix by Nathan Hill

'The best new writer of fiction in America. The best.' - John Irving

Nathan Hill's brilliant debut takes the reader from the rural Midwest of the 1960s, to New York City during Occupy Wall Street; from Chicago in 1968, to wartime Norway: home of the mysterious Nix.

Meet Samuel: stalled writer, bored teacher at a local college, obsessive player of online video games. He hasn't seen his mother, Faye, in decades, not since she abandoned her family when he was a boy. Now she has suddenly reappeared, having committed an absurd politically motivated crime that electrifies the nightly news, beguiles the Internet, and inflames a divided America. The media paints Faye as a radical hippie with a sordid past, but as far as Samuel knows, his mother was an ordinary girl who married her high-school sweetheart. Which version of his mother is true? Two facts are certain: she's facing some serious charges, and she needs Samuel's help.

As Samuel begins to excavate his mother's, and his country's, history, he will unexpectedly find that he has to rethink everything he ever knew about her - a woman with an epic story of her own, a story she has kept hidden from the world.

Impressive that a debutant, Nathan Hill, with his scintillating The Nix has given us a character who comes close to out-Trumping Trump . . . Just one of the many pleasures of this engaging story of a mother and son whose private travails become front-page news. -- New Year Highlights * Observer *
Alarmingly good . . . both a Great American Novel as well as a great American novel... aches with all-new relevance. * Guardian *
A superb debut novel . . . could well be the most ambitious novel of the year... It seems like Hill is a writer who can do pretty much what he wants. * Daily Telegraph *
Compulsive and crazily entertaining -- Anthony Quinn * Observer *
We're in the presence of a major new comic novelist . . . a brilliant, endearing writer . . . Readers . . . will be dazzled. * Washington Post *
The best new writer of fiction in America. The best. -- John Irving
I got a big kick out of Nathan Hill's impressive first novel, The Nix (Picador), out in the UK next year. Hill's zeitgeisty portrayals of video game addiction and customer-oriented university education are brilliant. -- Lionel Shriver, 'Books of the Year 2016' * Observer *
Wonderful. Everything that doesn't involve reading this book is a nuisance and a distraction. -- Sarah Jessica Parker
Hill has so much talent to burn that he can pull off just about any style, imagine himself into any person and convincingly portray any place or time. The Nix is hugely entertaining and unfailingly smart, and the author seems incapable of writing a pedestrian sentence or spinning a boring story * New York Times Book Review *
There is an accidental topicality in Hill's debut, about an estranged mother and son whose fates hinge on two mirror-image political events - the Democratic Convention of 1968 and the Republican Convention of 2004. But beyond that hook lies a high-risk, high-reward playfulness with structure and tone: comic set pieces, digressions into myth, and formal larks that call to mind Jennifer Egan's A Visit From the Goon Squad. * New York Magazine *
It broke my heart, this book. Time after time. It made me laugh just as often. I loved it on the first page as powerfully as I did on the last . . . Nathan Hill? . . . He's gonna be famous. -- National Public Radio
This is a book to get one excited not only about Hill and his future as a novelist, but also about the power of writing to blot out background-noise banality and vault us forward into the new and wondrous. * San Francisco Chronicle *
Nathan Hill Is Compared to John Irving. Irving Compares Him to Dickens. * New York Times *
Hill skillfully blends humor and darkness, imagery and observation. He also excels at describing technology, addition, cultural milestones, and childhood ordeals. Cameos by [the famous] add heart and perspective to this rich, lively take on American social conflict, real and invented, over the last half-century. * Publishers' Weekly, starred and boxed review *
This guy has chops -- Jay McInerney
A great sprawling feast of a first novel . . . both darkly satirical and uproariously funny . . . Hill writes with an astonishingly sure hand for a young author . . . Let's just call him the real thing. * Newsday *
Dazzling . . . rich and multilayered . . . the debut of an important new writer, able to variously make readers laugh out loud while providing a melancholy, resonant tale that argues "there is no greater ache than this: guilt and regret in equal measure." * USA Today *
The Nix is a timely mass-media and political satire, a family saga and two bildungsromans rolled into one ? and, in each facet, Nathan Hill crafts a hilarious, observant, unputdownable tale. * Huffington Post *
By turns, wickedly funny, shockingly wise, touching and thought-provoking . . . a rich buffet of a novel. * Toronto Star *
A fantastic novel about love, betrayal, politics and pop culture - as good as the best Michael Chabon or Jonathan Franzen. * People *
A stunning debut . . . the first book I've read in two decades that earns the title Great American Novel. -- Liesl Schillinger, 'What's the Best Book, New or Old, You Read This Year?' * New York Times *
Not only dramatising America's great tussle between minority interests and Midwestern grievances, [The Nix] even features a rogue presidential candidate who talks about immigrants as though they are coyotes damaging crops . . . But it's the human drama of a relationship between a son and his mother (too busy protesting in the Sixties to bring him up) that will keep you hooked while you think. * GQ *
This self-assured, sprawling debut is about the relationship between a college professor and his mother. It's a dense, satirical piece of fiction which offers commentary on the American history and modern technology. This novel is more relevant than ever in these tech-crazed times of mass media and political turmoil. With J.J. Abrams adapting it for a miniseries starring none other than Meryl Streep, The Nix is definitely one of the highlights of 2017 * Wales Arts Review *
I have not read anything like this since . . . Jonathan Franzen . . . Gripping and funny. * Evening Standard *
My favourite novel of our solipsistic times is easily The Nix by Nathan Hill. Laura Pottsdam is a student caught plagiarising by her literature professor, the protagonist of the novel Samuel Andresen-Anderson. Pottsdam is the crushing embodiment of our Trumpian age... If his debut is anything to go by, Hill may well one day be seen as the Charles Dickens of our self-obsessed age. -- Will Storr * Guardian *

Nathan Hill was born in Iowa in 1975 and lives with his wife in Naples, Florida. The Nix is his first novel.

GOR008626967
The Nix by Nathan Hill
Nathan Hill
Used - Like New
Paperback
Pan Macmillan
2017-09-21
640
1509807853
9781509807857
Short-listed for Goldsboro Books Glass Bell Award 2018 (UK)
Book picture is for illustrative purposes only, actual binding, cover or edition may vary.
The book has been read, but looks new. The book cover has no visible wear, and the dust jacket is included if applicable. No missing or damaged pages, no tears, possible very minimal creasing, no underlining or highlighting of text, and no writing in the margins.