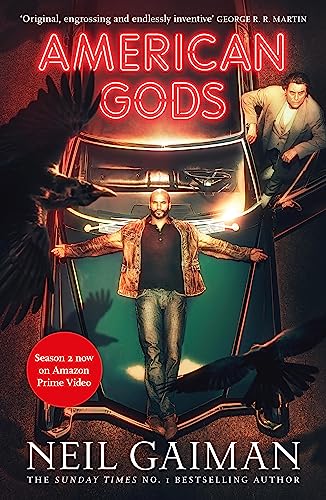 If you are to survive, you must believe.

Shadow Moon has served his time. But hours before his release from prison, his beloved wife is killed in a freak accident. Dazed, he boards a plane home where he meets the enigmatic Mr Wednesday, who professes both to know Shadow and to be king of America.

Together they embark on a profoundly strange road trip across the USA, encountering a kaleidoscopic cast of characters along the way. Yet all around them a storm threatens to break.

The war has already begun, an epic struggle for the very soul of America, and Shadow is standing squarely in its path.

GOR008300659
American Gods: TV Tie-In by Neil Gaiman
Neil Gaiman
Used - Very Good
Paperback
Headline Publishing Group
2017-03-28
736
1472245547
9781472245540
N/A
Book picture is for illustrative purposes only, actual binding, cover or edition may vary.
The book has been read, but looks new. The book cover has no visible wear, and the dust jacket is included if applicable. No missing or damaged pages, no tears, possible very minimal creasing, no underlining or highlighting of text, and no writing in the margins.