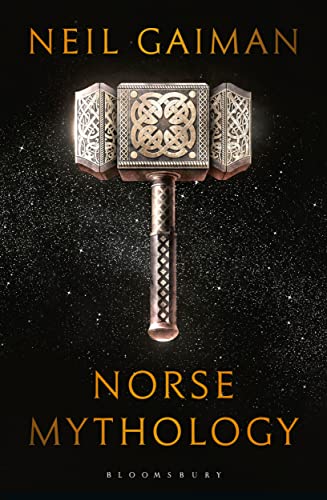 THE NO 1 SUNDAY TIMES AND NEW YORK TIMES BESTSELLER Bestselling and much loved author Neil Gaiman, whose novel American Gods has been adapted into a major television series, brings vividly to life the stories of Norse mythology that have inspired his own extraordinary writing in this number one Sunday Times bestseller The great Norse myths are woven into the fabric of our storytelling - from Tolkien, Alan Garner and Rosemary Sutcliff to Game of Thrones and Marvel Comics. They are also an inspiration for Neil Gaiman's own award-bedecked, bestselling fiction. Now he reaches back through time to the original source stories in a thrilling and vivid rendition of the great Norse tales. Gaiman's gods are thoroughly alive on the page - irascible, visceral, playful, passionate - and the tales carry us from the beginning of everything to Ragnarok and the twilight of the gods. Galvanised by Gaiman's prose, Thor, Loki, Odin and Freya are irresistible forces for modern readers and the crackling, brilliant writing demands to be read aloud around an open fire on a freezing, starlit night.
It's virtually impossible to read more than ten words by Neil Gaiman and not wish he would tell you the rest of the story ... The halls of Valhalla have been crying out for Gaiman to tell their stories to a new audience. Hopefully this collection will be just the beginning * Natalie Haynes, Observer *
Brilliant ... Somehow he brings us close to this world of mountains and cataracts, monsters and elves * Sunday Times Book of the Week *
There have been countless retellings of the Norse myths, but few that give them the everyday immediacy of Neil Gaiman's wry, punchy phrasing and delivery. You feel that bumbling Thor, wise Odin, fabulous Freya and the wily Loki are part of him * The Times *
Gaiman retells the Norse sagas in his own lucid, laid-back style, teasing out the humour and absurdity inherent in the source material ... An honest retelling that betrays an abiding personal passion for the exploits of dim-witted Thor, mercurial Loki, bombastic Odin and the rest * Financial Times *
Beautifully told and a lot of fun * Mail on Sunday *
A bold undertaking ... An excellent introduction to the stories that wield such great cultural significance * Economist *
Gaiman's voice is engaging; often quirkily humorous ... The author's affection for the characters shines out from every page, and the narrative, always crisp and direct, combines an adult's insight with a childlike sense of wonder at the magic of it all * Joanne Harris, Spectator *
Gaiman's characteristically limpid, quick-running prose keeps the dramatic impetus of the medieval texts ... His telling of the tales is for children and adults alike, and this is both right and wise, it being the property of genuine myth on many levels * Ursula K Le Guin, Guardian *
It's the perfect moment to become acquainted with Gaiman's eerie, fantastical writing. In his latest book, he recasts the Nordic sagas as gripping human dramas, putting flesh and blood on the slippery Loki, the hard-charging Odin and others * Irish Independent *
His work draws you in and eats you up with new worlds and ideas * Metro *
Neil Gaiman has written highly acclaimed books for children and adults and is the first author to have won the Carnegie and Newbery Medals for the same work - The Graveyard Book. The Sleeper and the Spindle, illustrated by Chris Riddell, won the 2016 Kate Greenaway Medal. His novel, American Gods, has been adapted into a major television series.
GOR008346435
9781408886816
1408886812
Norse Mythology by Neil Gaiman
Neil Gaiman
Used - Like New
Hardback
Bloomsbury Publishing PLC
2017-02-07
304
N/A
Book picture is for illustrative purposes only, actual binding, cover or edition may vary.
The book has been read, but looks new. The book cover has no visible wear, and the dust jacket is included if applicable. No missing or damaged pages, no tears, possible very minimal creasing, no underlining or highlighting of text, and no writing in the margins
Trustpilot