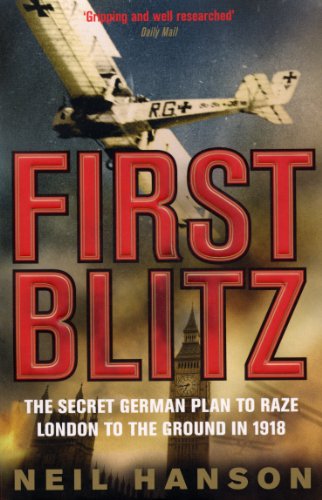 In Stock
£4.49
Over the course of 1917, German bombers threatened to engulf London in firestorms - a portent of the London Blitz and the Battle of Britain over twenty years later.
Very Good
Only 4 left

A world away from the killing fields of France was a battle that could have changed the face of history. Over the course of 1917, German bombers threatened to engulf London in firestorms - a portent of the London Blitz and the Battle of Britain over twenty years later. They were determined to bring London to its knees. The First Blitz took place over eight nights in 1917, but it was the second wave of attacks in the summer of 1918, following the development of the 'Elektron' incendiary bomb, that came within an ace of obliterating London. The margin between the survival of the world's greatest capital city and its total destruction came down to less than one hour. The events and decisions taken in the course of those fateful days were as important as anything that happened on the Western Front. With breathtaking insight, compelling drama and supreme narrative clarity, Neil Hanson tells the story of the air war that could have altered the course of the conflict, and with it the history of the twentieth century itself . . .

"Neil Hanson is that rare beast - a popular historian who never talks down to his readers. Clearly and engagingly written, his book puts more academic historians to shame by discovering a big subject, investigating it thoroughly and drawing bold but far-reaching conclusions from it." * Sunday Telegraph *
"The 1940s bombing raids over London have taken such a powerful grip upon our imagination that the existence of an earlier Blitz, in World War I, will come to many readers as a complete surprise. Yet as Neil Hanson...demonstrates in this gripping and well-researched book, it was in may ways more terrifying" * Daily Mail *
"Using first-hand witnesses plus government war records, Hanson draws a powerful picture of the impact of these first air raids" * Time Out *
"History invariably falls into two categories: academic and narrative...To marry the two is a rare art - and it is an art Neil Hanson has mastered...This is a compelling story compellingly told...Gripping" * Navy News *
"An author who shows a remarkable talent for dipping into history and pulling out gems has done it again" * Bradford Telegraph & Argus *

Neil Hanson is the author of four acclaimed works of narrative history: The Custom of the Sea, The Dreadful Judgement,The Confident Hope of a Miracle. and The Unknown Soldier. He lives in Yorkshire with his family.

GOR001195423
First Blitz by Neil Hanson
Neil Hanson
Used - Very Good
Paperback
Transworld Publishers Ltd
2009-02-26
592
0552155489
9780552155489
N/A
Book picture is for illustrative purposes only, actual binding, cover or edition may vary.
This is a used book - there is no escaping the fact it has been read by someone else and it will show signs of wear and previous use. Overall we expect it to be in very good condition, but if you are not entirely satisfied please get in touch with us.