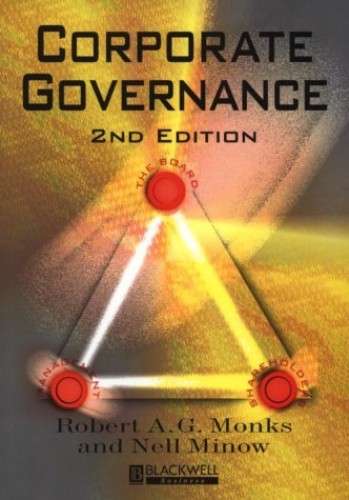 In Stock
£7.99
The abuses and excesses of the takeover era and the exponential growth of the institutional investor have transformed the roles of the shareholders, managers and directors of publicly-held companies. This book explains how it happened, where it is going, and what the impact will be.
Very Good
Only 1 left

This book provides a comprehensive look at the history, the myth, the reality, and the future of corporate governance issues. It explains how the roles of shareholders, managers and directors have been transformed by the abuses and excesses of the takeover era, the exponential growth of the institutional investor, and the unprecedented ability of shareholders to find each other on the internet. The second edition has been extensively re-written and updated. Changes include:Excerpts from NACD reports on board professionalism and CEO succession. Impact of the internet on shareholder communications and disclosure. New cases - Daimler-Benz: Dow-Jones: Saatchi & Saatchi: Furr's/Luby's: Mirror: Brazil: Political contributions (US/UK). Updated cases - Inc General Motors: Sears.Including numerous case studies and supplementary online material, this book is an indispensable resource for students of business, corporate finance, law, and public policy. For supplemental resources including full appendices visit www .blackwellpublishers.co.uk/monks

"Everyone interested in business issues should welcome the publication of a new edition of this first-rate text." Professor Brian Cheffins, University of Cambridge


"Monks and Minow is truly a remarkable achievement - it combines a global perspective and a finely balanced account of regulatory policy with illuminating case studies of how governance works inside companies. It remains the key point of reference in its field." Simon Deakin, University of Cambridge

Bob Monks and Nell Minow are respectively Founder and President of Institutional Shareholder Services, Washington DC, Bob Monks, in particular, is one of the best known figures in corporate governance in the USA, having made his name through attacking the 'corporate establishment'. he has been director of a number of major US companies and in 1984 was selected by Ronald Reagan to head up the Labour Department's pensions and welfare benefits office. He and Nell Minow are also head of the Lens Fund which is designed to be 'a vehicle for collective action'. Its aim is to invest in large companies that have a defensive corporate culture of 'management incompetence' - so far the Lens has targeted companies such as Sears, Chrysler, Chase Manhattan and American Express. Monks and Minow have also collaborated on two other books - Power and Accountability (1991) and Watching the Watchers (Blackwell Business, 1996).

Foreword: B. Minoru Makihara. Acknowledgements. Introduction. 1. What is a Corporation? Definitions. Evolution of the Corporate Structure. The Purpose of a Corporation. The Corporation as a +ACI-Person+ACI-. The Corporation as a +ACI-Moral Person+ACI-. The Corporation in Society. Future Directions. Corporate Power and Corporate Performance. Corporate Crime: +ACI-Within the Limits of the Law+ACI-. Corporations and Government: Co-Opting the Market. Measuring Performance. Balancing Interests. Good and Bad Corporations? Equilibrium: The Cadbury Paradigm. Measuring Value Enhancement. GAAP. Market Value. 'Isn't it More Important to Go from +ACM-5 to +ACM-4 en Route to +ACM-1 Than to Increase EPS by 5 Percent or 10 Percent this Year? 'Eva (R): Economic Value Added. Human Capital: +ACI-It's Not What You Own but What You Know+ACI-. The Value of Cash. Corporate 'Externalities'. Case in Point: Prototype Plc. 2. Shareholders: Ownership: Definitions. Early Concepts of Ownership. Early Concepts of the Corporation. A Dual Heritage: Individual and Corporate +ACI-Rights+ACI-. The Re-Invention of the Corporation: Eastern Europe in the 1990s. The Evolution of the American Corporation. The Essential Elements of the Corporate Structure. The Separation of Ownership and Control, Part 1: Berle and Means. Fractionated Ownership. The Separation of Ownership and Control, Part 2: The Takeover Era. A Framework for Participation. Ownership and Responsibility. No Innocent Shareholder. To Sell or Not to Sell: The Prisoner's Dilemma. Who the Institutional Investors Are. The Biggest Pool of Money in the World. Pension Plans as Investors. Pension Plans as Owners. Public Pension Funds. Economically targeted Investments. Federal Employee Retirement System. Tiaa-Cref. Private Pension Funds. The Sleeping Giant Awakens: Shareholder Proxy Proposals on Governance Issues. Focus on the Board. Sec's Proxy Reform. Investing in Activism. New Models and New Paradigms. The +ACI-Ideal Owner+ACI-. Pension Funds as +ACI-Ideal Owners+ACI-. Is the +ACI-Ideal Owner+ACI- Enough? 3. Directors: Monitoring: A Brief History of Anglo-American Boards. Today's Typical Board. Board Duties: The Legal Framework. The Board-Management Relationship. Information Flow. Cases in Point: RJR Nabisco, Lone Star Industries, Tambrands. The CEO-Chairman. Catch 22: The Ex-CEO as Director. Director Nomination. Case in Point: A Director's departure. Case in Point: A Director Demands More from the Board. Director Compensation. Interlocks. Time and Money. The Director's Role in Crisis. +ACI-Independent+ACI- Outside Directors. Case in Point: Sears. Case in Point: Compaq Computers. Director Election. Staggered Boards. Confidential Voting. Impact of the Takeover Era on the Role of the Board. The Fiduciary Standard and the Delaware Factor. Case in Point: Trans Union. Cases in Point: Revlon and Unocal. How did Boards Respond? Recommendations for the Future. Increasing Independent Directors' Authority. +ACI-A Market for Independent Directors+ACI-. +ACI-Designated Director+ACI-. +ACI-Just Vote No+ACI-. Board Evaluation. Lipton/Lorsch's +ACI-Modest Proposal+ACI-. Making Directors Genuinely +ACI-Independent+ACI-. Case in Point: Compaq and Salomon Inc. Involvement by Shareholders. 4. Management Performance: Introduction. What do we Want from the CEO? +ACI-Dinosaurs+ACI-. Executive Compensation. Stock Options. Restricted Stock. Shareholder Concerns: Several Ways to Pay Day. Future Directions. CEO Employment Contracts. Employees: Compensation and Ownership. Employee Stock Ownership Plans. Mondragon and Symmetry: Integration of Employees, Owners and Directors. 5. International Governance: Corporate Governance Has Gone Global. The Triumph of the Corporation. The Global Company. The Global Investor. The Demands of Capital. The Triumph of the Code. Some Leading International Codes. Universal Codes. An Investor Perspective. ICGN Statement on Corporate Governance Principles. Statement on the OECD Principles. ICGN Approach to the OECD Principles. A 'Working Kit' Statement of Corporate Governance Criteria. OECD Principles as Amplified. The Asian Financial Crisis, the World Bank and Governance in Emerging Markets. World Bank and G7 Respond. Cases in Point: Institutional Reform in Emerging Markets. Global Corporate Governance Forum. Case in Point: Indian Governance. The Developed World. Japan. Corporate Governance in Japan: A Report by Oxford Analytica. Case in Point: Ripplewood Holdings. Corporate Governance Forum of Japan. Cases in Point: Aspects of Japanese Governance Reform. Germany. Corporate Governance in Germany: A Report by Oxford Analytica. Controversy Over the Banks' Role. Board Authority and Management's Role. Challenges and Opportunities in the Next Decade. Signs of Change. German Governance Code. Case in Point: Comments on the Governance Code. Case in Point: Metallgesellschaft and Holzman. Earthquake. Mannesmann. Tax Reform. Future Perfect? Case in Point: Daimler Chrysler and the Perils of Globalization. Case in Point: Awkward Options for SAP. France. French Ownership. Vienot I and II. Board Structure. Pay Disclosure. Case in Point: Rhone Poulenc. Case in Point: Eramet. Convergence. 6. Case Studies: Corporations in Crisis: General Motors and Pierre du Pont. General Motors: What Went Wrong? General Motors and Ross Perot. General Motors after Perot: Smith and Stempel. Stone +ACY- Webster: The Company that Built America. How Might this Narrative Transpired Differently if a US-Style Board Structure Had Been in Place, with a Board Made up Largely of Non-Executives? And, Consider How the US Activism Landscape Would be different if Shareholders Representing 10 Percent of a Company's Equity Were Able to Call an EGM. Index.

GOR001125910
Corporate Governance by Nell Minow
Nell Minow
Used - Very Good
Paperback
John Wiley and Sons Ltd
2001-06-08
480
0631222642
9780631222644
N/A
Book picture is for illustrative purposes only, actual binding, cover or edition may vary.
This is a used book - there is no escaping the fact it has been read by someone else and it will show signs of wear and previous use. Overall we expect it to be in very good condition, but if you are not entirely satisfied please get in touch with us.