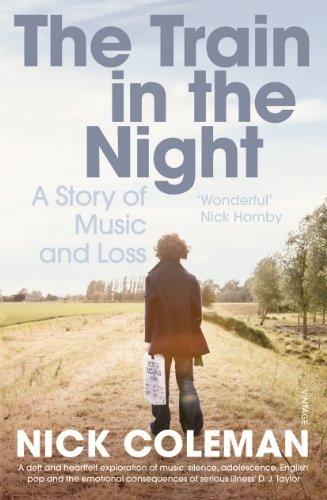 The Train in the Night
by Nick Coleman

In Stock
£2.49
SHORTLISTED FOR THE 2012 WELLCOME TRUST BOOK PRIZEHow do you lose music?
Very Good Good
6 in stock

The Train in the Night Summary

The Train in the Night: A Story of Music and Loss by Nick Coleman

SHORTLISTED FOR THE 2012 WELLCOME TRUST BOOK PRIZE How do you lose music? Then having lost it, what do you do next? Nick Coleman found out the morning he woke up to a world changed forever by Sudden Neursosensory Hearing Loss. The Train in the Night is an account of one man's struggle to recover from the loss of his greatest passion - and go one further than that: to restore his ability not only to hear but to think about and feel music, by going back to the series of big bangs which kicked off his musical universe. The result a memoir not quite like any other. It is about growing up, about taste and love and suffering and delusion and longing to be Keith Richards. It is funny, heartbreaking and, above all, true.

The Train in the Night Reviews

"This is a book for anyone who grew up with pop music, listens to it still and has spent too much time thinking about it and talking about it. But it's also a book about love and loss and middle age and looming mortality, written with grace and the driest imaginable humour. I'm not sure I can recommend it highly enough" * Spectator *
"A deft and heartfelt exploration of music, silence, adolescence, English pop and the emotional consequences of serious illness, and above all a discussion of something modern culture has very nearly lost touch with - the idea, and the desirability, of taste." -- D. J. Taylor
"In a story told with warmth, wit, candour and dry, self-deprecating humour and without a whiff of self-pity... Coleman is insightful and convincing in his musings on music's emotional impact, funny in his recollections of the pains of growing up and sharp in his analysis of the thorny issue of musical 'taste'" * Time Out *
"Coleman is a spirited person, who writes with an irresistible Hornby-esque skip in his style... funny and admirable" -- Andrew Motion * Guardian *
"A beautiful, elegiac ballad. Coleman writes elegantly and movingly of his youth, of growing up and of his intimate relationship with an art form that has shaped his memories" * Financial Times *

Following a brief spell as a stringer at NME in the mid-1980s, Nick Coleman was Music Editor of Time Out for seven years, then Arts and Features Editor at the Independent and the Independent on Sunday. He has also written on music for The Times, Guardian, Telegraph, New Statesman, Intelligent Life, GQ and The Wire. He is the author of The Train in the Night, which was shortlisted for the 2012 Wellcome Book Prize.

GOR005049585
The Train in the Night: A Story of Music and Loss by Nick Coleman
Nick Coleman
Used - Very Good
Paperback
Vintage Publishing
2013-03-07
288
009955433X
9780099554332
Long-listed for Gordon Burn Prize 2013 (UK)
Book picture is for illustrative purposes only, actual binding, cover or edition may vary.
This is a used book - there is no escaping the fact it has been read by someone else and it will show signs of wear and previous use. Overall we expect it to be in very good condition, but if you are not entirely satisfied please get in touch with us.