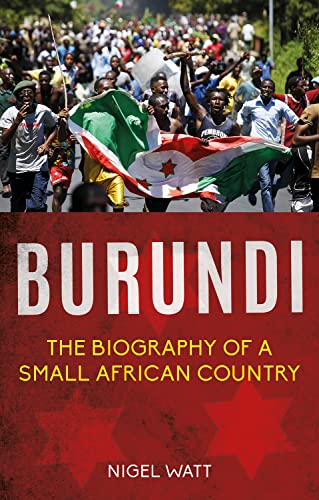 In Stock
£18.99
Burundi is a small Central African country with a complex history of ethnic tension. This book traces the origins of its political crises, sheds light on Burundi's contemporary history by means of interviews with leading participants and those whose lives have been affected by horrific events, and helps demystify the country's "ethnic" divisions.
New£18.99
Only 1 left

Burundi: The Biography of a Small African Country by Nigel Watt

Little known in the English-speaking world, Burundi is Rwanda's twin, a small Central African country with a complex history of ethnic tension between its Hutu and Tutsi populations that has itself experienced traumatic events, including mass killings of over 200,000 people. The country remained in a state of simmering civil war until 2004, after which Julius Nyerere and Nelson Mandela took turns as mediators in a lengthy, and eventually successful, peace process which has endowed Burundi with new institutions, including a new constitution that led to the election of Pierre Nkurunziza as president in 2005.After some years of modest progress Burundi's peace was shattered again when the president decided to stand for a third term in 2015. The tensions today are more political than ethnic but the country faces many other problems, above all the entrenched poverty which has seen Burundi designated as one of the most deprived countries on earth.Nigel Watt's book discusses the troubled political fortunes of this beautiful yet disturbed country which is now part of the East African Community. He traces the origins of its political crises, sheds light on Burundi's recent history by means of interviews with leading participants and those whose lives have been affected by horrific events, helps demystify the country's 'ethnic' divisions and follows the fortunes of the Nkurunziza regime.

A very accessible, empathic, and yet accurate book. Nigel Watt puts people and their experiences and emotions at the middle of his story. * Filip Reyntjens, University of Antwerp *
This is a book about reality, an item in very short supply when people write about African conflicts. [...] Hope based on nice feelings is a non-starter in the nasty world of Africa's small wars. Nigel Watt provides the only picture of hope which can be realistically contemplated, that which bases itself on informed and uncompromising local knowledge. This is a book which should be read by all humanitarian workers and members of the international community involved in what are today coyly called "complex emergencies. * Gerard Prunier, author, From Genocide to Continental War: The Congolese Conflict and the Crisis of Contemporary Africa *
Topical and action-oriented, can be read as an almost complete introduction for the newcomer to the subject. * Race and Class *

Nigel Watt worked in Burundi for several years and was formerly Director of the Africa Centre in London.