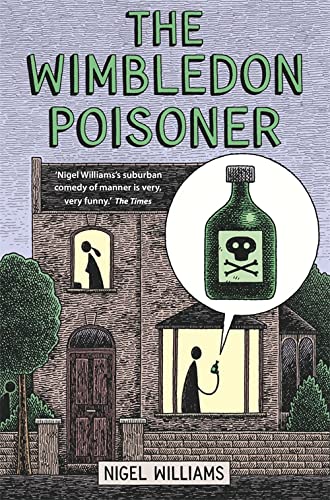 The Wimbledon Poisoner
by Nigel Williams

The Wimbledon Poisoner by Nigel Williams

Henry Farr is forty years old. He is suburban, average, conventional - and desperate to be rid of his wife, Elinor. Inspired by a grisly episode in Wimbledon's local history, Farr begins to concoct a recipe for the perfect murder. But his plans go terribly, terribly wrong - and before long, poor Henry's best efforts to set himself free, in fact send him spiralling wildly out of control.

Nigel Williams's comedy of suburban manners is very, very funny; the writing is sprightly, the caricatures spot on. * The Times *
A brilliantly witty writer. * The Sunday Times *
A very good read, with a few comic set pieces that are comparable to Wodehouse * New Statesman *
I laughed aloud sufficiently often over this book that it was necessary to sit in a room on my own to read it. * The Spectator *
The Wimbledon Poisoner is a marvelously funny book. * Daily Mail *

Nigel Williams is the author of twelve novels - including the best-selling Wimbledon Trilogy. His stage plays includeClass Enemy, still being performed all over the world, and a dramatisation of William Golding's Lord of the Flies recently revived at the Regent's Park Theatre. He also wrote the Emmy and Golden Globe award-winning Elizabeth I, starring Helen Mirren, while his BBC Radio 4 comedy 'HR' , with Jonathan Pryce and Nicholas le Prevost, is now in its fourth series. He has lived in Putney for thirty years.

GOR005108612
The Wimbledon Poisoner by Nigel Williams
Nigel Williams
Used - Very Good
Paperback
Little, Brown Book Group
2013-07-18
336
1472106768
9781472106766
N/A
Book picture is for illustrative purposes only, actual binding, cover or edition may vary.
This is a used book - there is no escaping the fact it has been read by someone else and it will show signs of wear and previous use. Overall we expect it to be in very good condition, but if you are not entirely satisfied please get in touch with us.