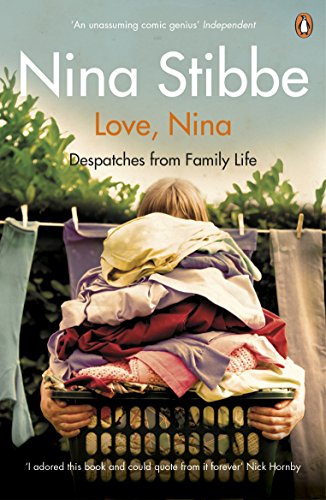 In Stock
£2.69
In 1982 Nina Stibbe, a 20-year-old from Leicester, moved to London to work as a nanny for a very particular family. It was a perfect match: Nina had no idea how to cook, look after children or who the weirdos were who called round.
Very Good Good Well Read
15 in stock

Being a nanny is great. Not like a job really, just like living in someone else's life. Today before breakfast Sam had to empty the dishwasher and Will had to feed the cat.

In the 1980s Nina Stibbe wrote letters home to her sister in Leicester describing her trials and triumphs as a nanny to a London family. There's a cat nobody likes, a visiting dog called Ted Hughes (Ted for short) and suppertime visits from a local playwright. Not to mention the two boys, their favourite football teams, and rude words, a very broad-minded mother and assorted nice chairs.

From the mystery of the unpaid milk bill and the avoidance of nuclear war to mealtime discussions on pie filler, the greats of English literature, swearing in German and sexually transmitted diseases, Love, Nina is a wonderful celebration of bad food, good company and the relative merits of Thomas Hardy and Enid Blyton.

I adored this book, and could quote from it forever. It's real, odd, life-affirming, sharp, loving, and contains more than one reference to Arsenal FC -- Nick Hornby * The Believer *
Last year, we had Roger Mortimer's splendidly bufferish Dear Lupin: Letters to a Wayward Son. Love, Nina - funny, quirky, vivid and touching - is every bit its equal * Daily Mail (Book of the Week) *
I loved this book. What a beady eye she has for domestic life, and how deliciously fresh and funny she is - a real discovery. -- Deborah Moggach, author of 'The Best Exotic Marigold Hotel'
Breezy, sophisticated, hilarious, rude and aching with sweetness: Love, Nina might be the most charming book I've ever read -- Maria Semple, author of 'Where'd You Go, Bernadette'
Funny, warm, life-affirming and accutely well-observed, Love, Nina is a gift that will keep on giving . . . A hoot * Metro *
The snippets of dialogue and vingettes evoke the characters and atmosphere brilliantly . . . Funny, sharp * Evening Standard *
Even if Adrian Mole wrote about the Primrose Hill set, it wouldn't be as funny and absorbing as Love, Nina * Psychologies *
Like a 1980s Mary Poppins with a sense of humour * Stylist *
The funniest new writer to arrive in years -- Andrew O'Hagan
Adrian Mole meets Mary Poppins mashed up in literary north London . . . Enormous fun * Bookseller *

Nina Stibbe was born in Leicester. She is the author of two works of non-fiction - Love, Nina and An Almost Perfect Christmas - and three novels: Man at the Helm, Paradise Lodge, and Reasons to be Cheerful, which won the Bollinger Everyman Wodehouse Prize for Comic Fiction 2019. Love, Nina won Non-Fiction Book of the Year at the 2014 National Book Awards and in 2016 was adapted by Nick Hornby into a BBC series starring Faye Marsay and Helena Bonham-Carter. She lives in Cornwall.

GOR005621715
Love, Nina: Despatches from Family Life by Nina Stibbe
Nina Stibbe
Used - Very Good
Paperback
Penguin Books Ltd
2014-02-27
352
0241965098
9780241965092
Winner of Specsavers National Book Awards: Popular Non-Fiction Book of the Year 2014
Book picture is for illustrative purposes only, actual binding, cover or edition may vary.
This is a used book - there is no escaping the fact it has been read by someone else and it will show signs of wear and previous use. Overall we expect it to be in very good condition, but if you are not entirely satisfied please get in touch with us.