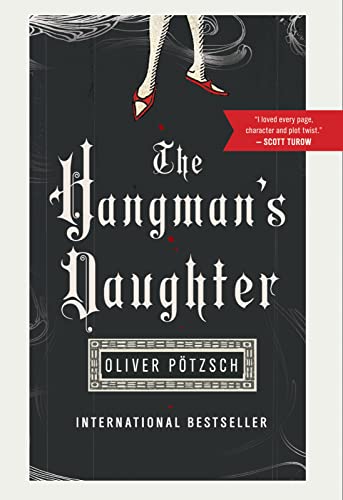 The Hangman's Daughter
by Oliver Poetzsch

The Hangman's Daughter by Oliver Poetzsch

Magdalena, the clever and headstrong daughter of Bavarian hangman Jakob Kuisl, lives with her father outside the village walls and is destined to be married off to another hangman's son--except that the town physician's son is hopelessly in love with her. And her father's wisdom and empathy are as unusual as his despised profession. It is 1659, the Thirty Years' War has finally ended, and there hasn't been a witchcraft mania in decades. But now, a drowning and gruesomely injured boy, tattooed with the mark of a witch, is pulled from a river and the villagers suspect the local midwife, Martha Stechlin.

Jakob Kuisl is charged with extracting a confession from her and torturing her until he gets one. Convinced she is innocent, he, Magdalena, and her would-be suitor to race against the clock to find the true killer. Approaching Walpurgisnacht, when witches are believed to dance in the forest and mate with the devil, another tattooed orphan is found dead and the town becomes frenzied. More than one person has spotted what looks like the devil--a man with a hand made only of bones. The hangman, his daughter, and the doctor's son face a terrifying and very real enemy.

Taking us back in history to a place where autopsies were blasphemous, coffee was an exotic drink, dried toads were the recommended remedy for the plague, and the devil was as real as anything, The Hangman's Daughter is the rollicking start to an exciting new series of historical mysteries, bringing to cinematic life the sights, sounds, and smells of seventeenth-century Bavaria, telling the engrossing story of a compassionate hangman who will live on in readers' imaginations long after they've put down the novel.

"Readers who like a plot-driven story with identifiable heroes and villains will be drawn to this ambitious novel. And unlike some stories in the genre, The Hangman's Daughter only gets better as the climax approaches -- an exciting duel between the hangman and his nemesis. It truly delivers the thing so many of us look for in our novels: entertainment." --BookPage "This work seamlessly merges brutality and compassion, and its elegant plot, appealing characters and satisfying conclusion will keep the reader wide awake and turning pages well into the night." -- Shelf Awareness for Readers

"The translator has done very well by the author; both setting and characters are vividly drawn, making for a compelling read . . . Based on the author's research into his own family history, this novel offers a rare glimpse into a less commonly seen historical setting. If you liked Umberto Eco's The Name of the Rose, give this a try." --Library Journal Xpress

"[Poetzsch's] novel reads quite vividly . . . Based on the author's family history, this excellent story brings 17th-century Bavaria alive with all its fears, superstitions and politics. Jacob Kuisl is not your ordinary hangman, and readers will root for him and his search for the truth. There's enough 'unreality' in the evil of superstitions that this novel may appeal to fantasy readers, and the twists and turns of the plot will appeal to mystery fans."--School Library Journal

"A brilliantly-researched and exciting story of a formative era of history when witches were hunted and the inquisitors had little belief in their methods beyond their effect in pacifying superstitious townspeople . . . Poetzsch, actually descended from a line of hangmen, delivers a fantastically fast-paced read, rife with details on the social and power structures in the town as well as dichotomy between university medicine and the traditional remedies, which are skillfully communicated through character interactions, particularly that of Magdalena and Simon. The shocking motivations from unlikely players provide for a twist that will leave readers admiring this complex tale from a talented new voice." --Publishers Weekly "This novel has been popular in Germany since its 2008 publication there, and it's easy to see why . . . [Poetzsch] does an excellent job of telling the story and supplying the historical backdrop. And his characters . . . are extremely well drawn and believable. Kudos, too, to translator Chadeayne, who retains the story's German flavor while rendering the text in smooth and highly readable English. Readers of historical fiction should find this very much to their liking." --Booklist "I loved every page, character and plot twist of The Hangman's Daughter, an inventive historical novel about a 17th-century hangman's quest to save a witch--from himself." --Scott Turow

Oliver Poetzsch, born in 1970, was for years a radio personality for Bavarian radio and a screenwriter for Bavarian Public Television. He is himself a descendent of the Kuisls, the well-known line of Bavarian executioners that inspired the novel. He lives with his family in Munich.

Lee Chadeayne is a former classical musician and college professor. He was one of the charter members of the American Literary Translators Association and is editor-in-chief of ALTA News.

GOR003709455
The Hangman's Daughter by Oliver Poetzsch
Oliver Poetzsch
Hangman's Daughter Tales
Used - Very Good
Paperback
Cengage Learning, Inc
2011-08-02
435
054774501X
9780547745015
N/A
Book picture is for illustrative purposes only, actual binding, cover or edition may vary.
This is a used book - there is no escaping the fact it has been read by someone else and it will show signs of wear and previous use. Overall we expect it to be in very good condition, but if you are not entirely satisfied please get in touch with us.