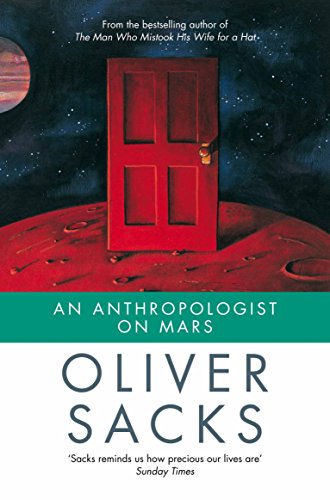 An Anthropologist on Mars
by Oliver Sacks

An Anthropologist on Mars Summary

An Anthropologist on Mars by Oliver Sacks

`An inexhaustible tourist at the farther reaches of the mind, Sacks presents, in sparse, unsentimental prose, the stories of seven of his patients. The result is as rich, vivid and compelling as any collection of short fictional stories' Independent on Sunday

As with his previous bestseller, The Man Who Mistook His Wife for a Hat, Oliver Sacks uses case studies to illustrate the myriad ways in which neurological conditions can affect our sense of self, our experience of the world, and how we relate to those around us. Writing with his trademark blend of scientific rigour and human compassion, he describes patients such as the colour-blind painter or the surgeon with compulsive tics that disappear in the operating theatre; patients for whom disorientation and alienation - but also adaptation - are inescapable facts of life.

`Sacks' great gift is his capacity to place himself in the position of his subjects, to see the world the way they see it and to empathize with their condition with great compassion but without patronage or pity' Daily Telegraph

Oliver Sacks was born in 1933 in London and was educated at Queen's College, Oxford. He completed his medical training at San Francisco's Mount Zion Hospital and at UCLA before moving to New York, where he soon encountered the patients whom he would write about in his book Awakenings. Dr Sacks spent almost fifty years working as a neurologist and wrote many books, including The Man Who Mistook His Wife for a Hat, Musicophilia, and Hallucinations, about the strange neurological predicaments and conditions of his patients. The New York Times referred to him as 'the poet laureate of medicine', and over the years he received many awards, including honours from the Guggenheim Foundation, the National Science Foundation, the American Academy of Arts and Letters, and the Royal College of Physicians. In 2008, he was appointed Commander of the British Empire. His memoir, On the Move, was published shortly before his death in August 2015.

GOR001209419
An Anthropologist on Mars by Oliver Sacks
Oliver Sacks
Used - Very Good
Paperback
Pan Macmillan
1996-01-12
336
0330343475
9780330343473
N/A
Book picture is for illustrative purposes only, actual binding, cover or edition may vary.
This is a used book - there is no escaping the fact it has been read by someone else and it will show signs of wear and previous use. Overall we expect it to be in very good condition, but if you are not entirely satisfied please get in touch with us.