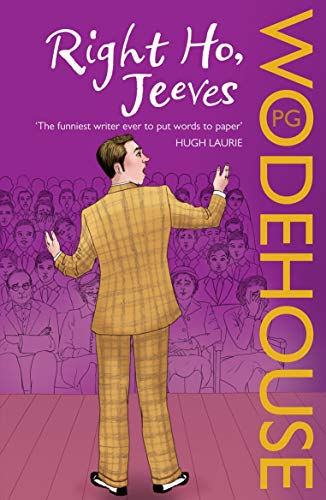 Used Price
£4.99
New RRP £8.99
Free Shipping in the UK
A Jeeves and Wooster novelGussie Fink-Nottle's knowledge of the common newt is unparalleled. The happiness of a pal - two pals, in fact - is at stake. Along with The Code of the Woosters, Right Ho, Jeeves is considered by many his finest comic novel - and perhaps the finest in the English language.
Reviews:
Trustpilot
Like New Very Good

A Jeeves and Wooster novel Gussie Fink-Nottle's knowledge of the common newt is unparalleled. Drop him in a pond of newts and his behaviour will be exemplary, but introduce him to a girl and watch him turn pink, yammer, and suddenly stampede for great open spaces. Even with Madeline Bassett, who feels that the stars are God's daisy chain, his tongue is tied in reef-knots. And his chum Tuppy Glossop isn't getting on much better with Madeline's delectable friend Angela. With so many broken hearts lying about him, Bertie Wooster can't sit idly by. The happiness of a pal - two pals, in fact - is at stake. But somehow Bertie's best-laid plans land everyone in the soup, and so it's just as well that Jeeves is ever at hand to apply his bulging brains to the problems of young love. Along with The Code of the Woosters, Right Ho, Jeeves is considered by many his finest comic novel - and perhaps the finest in the English language.

GOR010731797
Right Ho, Jeeves: (Jeeves & Wooster) by P.G. Wodehouse
P.G. Wodehouse
Jeeves & Wooster
Used - Like New
Paperback
Cornerstone
2008-05-01
304
0099513749
9780099513742
N/A
Book picture is for illustrative purposes only, actual binding, cover or edition may vary.
The book has been read, but looks new. The book cover has no visible wear, and the dust jacket is included if applicable. No missing or damaged pages, no tears, possible very minimal creasing, no underlining or highlighting of text, and no writing in the margins.