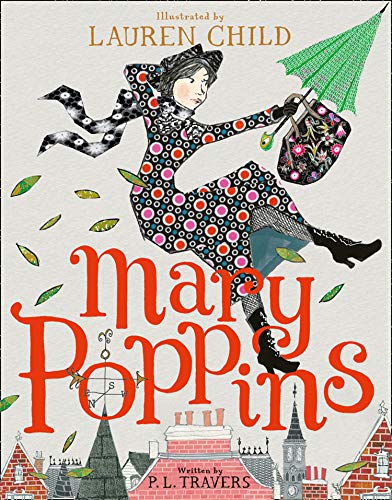 When Mary Poppins arrives at their house on a gust of the East Wind and slides up the bannister, Jane and Michael Banks's lives are turned magically upside down.

Who better to reimagine this endearing children's classic than today's most instantly recognisable and best-loved artist-illustrator? Lauren Child brings the magic of Mary Poppins into the hearts and imagination of readers and fans new and old.

First published in 1934, Mary Poppins has been delighting readers ever since, both in books and on film. This stunning deluxe edition is published ahead of the release of the hotly anticipated Disney film Mary Poppins Returns.

"Mary Poppins is the Good Fairy, whom we are all seeking"
Times Literary Supplement

'Very beautiful to look at and a lot of fun' - BookTrust

'Lauren Child is so good it's exhilarating' - The Independent

P.L. Travers was born in 1899 in Maryborough in Queensland, Australia and was one of three sisters. She worked as a secretary, a dancer and an actress, but writing was P.L. Travers's real love, and for many years she was a journalist. It was while recuperating from a serious illness that she wrote Mary Poppins - "to while away the days, but also to put down something that had been in my mind for a long time", she said. She recieved an OBE in 1977, and died in 1996.

Lauren Child burst onto the children's books scene in 1999 and has since published many bestselling and award-winning books, including those featuring the hugely popular Charlie and Lola, and the Clarice Bean series. She has won numerous awards, including the prestigious Kate Greenaway Medal and the Smarties Gold Award. Lauren is the current Waterstones Children's Laureate.

GOR009569556
Mary Poppins: Illustrated Gift Edition by P. L. Travers
P. L. Travers
Used - Very Good
Hardback
HarperCollins Publishers
2018-11-01
192
0008289360
9780008289362
N/A
Book picture is for illustrative purposes only, actual binding, cover or edition may vary.
This is a used book - there is no escaping the fact it has been read by someone else and it will show signs of wear and previous use. Overall we expect it to be in very good condition, but if you are not entirely satisfied please get in touch with us.