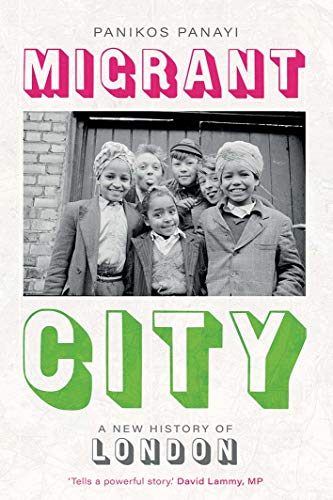 New Price
£19.99
Free Shipping in the UK
The first history of London to show just how far the city has been built, shaped, and made a great success through immigration
New£19.99

Migrant City: A New History of London by Panikos Panayi

The first history of London to show how immigrants have built, shaped and made a great success of the capital city

London is now a global financial and multicultural hub in which over three hundred languages are spoken. But the history of London has always been a history of immigration.

Panikos Panayi explores the rich and vibrant story of London- from its founding two millennia ago by Roman invaders, to Jewish and German immigrants in the Victorian period, to the Windrush generation invited from Caribbean countries in the twentieth century. Panayi shows how migration has been fundamental to London's economic, social, political and cultural development.

Migrant City sheds light on the various ways in which newcomers have shaped London life, acting as cheap labour, contributing to the success of its financial sector, its curry houses, and its football clubs. London's economy has long been driven by migrants, from earlier continental financiers and more recent European Union citizens. Without immigration, fueled by globalization, Panayi argues, London would not have become the world city it is today.

"Admirably thorough...Anyone curious about the impact of migration on the history and culture of London could do worse than read the chapter on food in this exhaustive history."-Andrew Holgate, The Sunday Times and The Sunday Times Ireland
"Said to be the first history of London to show how immigrants have built, shaped and made a great success of the capital city, Migrant City by Panikos Panayi is a fascinating and revealing book."-John Singleton, Methodist Recorder
"Migrant City, an invaluable and scholarly resource, chronicles multi-shaded, multi-ethnic London in all its glory."-Ian Thomson, Evening Standard
"An interesting and rewarding book...You can be familiar with the facts of everyday life in a cosmopolitan, multicultural city but still be surprised and enriched by Panayi's scholarly analysis."-James Evans, Spectator
"[A] compendious and illuminating survey of London"-Boyd Tonkin, The Arts Desk
"A love letter to the UK's capital and its history of immigration"-Maya Goodfellow, Prospect
"Detailed and well-referenced...a valuable resource"-Jad Adams, Who Do You Think You Are?

"Immigrants from near and far are the lifeblood of any great city, none more than London. This is a masterly and invaluable history of a neglected topic."-Simon Jenkins, author of A Short History of London

"An eclectic integration of interviews, personal stories, case-studies and historical analyses, Migrant City: A New History of London tells a powerful story about London's reliance on immigration. Its potency comes from its incontrovertibility; without immigration, London would not exist as we know it. Panayi bravely confronts the lazy and often arbitrary distinction between immigrant and native to boldly showcase what it really means to be a Londoner in the modern world."-David Lammy, MP for Tottenham and campaigner for the Windrush generation

"The history of London book I've been waiting a London lifetime for - Panayi delivers modern and ancient truths about this city through a personal, heartfelt style that beats from the page. In these divisive times, this is an urgent and necessary history of our capital city."-Sabrina Mahfouz, contributor to The Good Immigrant

Panikos Panayi was born in London to Greek Cypriot immigrants and grew up in the multicultural city developing during the 1960s and 1970s. A leading authority on the history of migration, he is Professor of European History at De Montfort University.