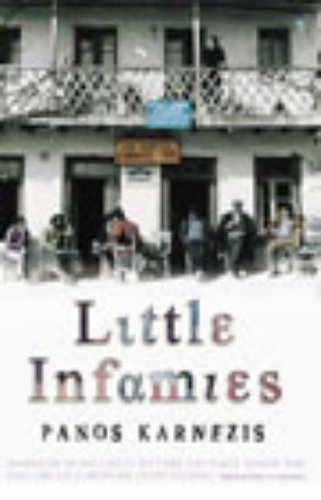 In Stock
£3.99
His characters are the people who live there - the priest, the barber, the whore, the doctor, the seamstress, the mayor - and the occasional animal: a centaur, a parrot that recites Homer, a horse called History.
Very Good Good
Only 4 left

Panos Karnezis' remarkable stories are all set in the same nameless Greek village. His characters are the people who live there - the priest, the barber, the whore, the doctor, the seamstress, the mayor - and the occasional animal: a centaur, a parrot that recites Homer, a horse called History. Their lives intersect, as lives do in a small place, and they know each other's secrets - the hidden crimes, the mysteries, the little infamies that men commit. Karnezis observes his villagers with a forgiving eye, and creates a world where magic invariably loses out to harsh reality, a world at once universal, funny and utterly compelling.

"Karnezis has captured the spirit of his people and spoken for them in a spellbinding, universal voice" * The Times *
"Karnezis's robust prose, as luminous and flinty as his landscape, sharpens his focus on captive souls in a lonely place" * Independent *
"Strikingly original... The stories in Little Infamies are extraordinary - shocking, colourful and resonant. Panos Karnezis is an entirely individual writer in full command of his material" * Sunday Times *
"A deeply impressive collection of short stories" * Sunday Telegraph *

Panos Karnezis was born in Greece in 1967 and came to England in 1992. He studied engineering at Oxford and worked in industry before starting to write in English. He studied for an MA in Creative Writing at the University of East Anglia. He is the author of Little Infamies, a collection of connected short stories set in a nameless Greek village, and two previous novels; The Maze, shortlisted for the 2004 Whitbread First Novel Award and The Birthday Party. Panos Karnezis lives in London.

GOR000900682
Little Infamies by Panos Karnezis
Panos Karnezis
Used - Very Good
Paperback
Vintage Publishing
2003-05-01
288
0099433524
9780099433521
N/A
Book picture is for illustrative purposes only, actual binding, cover or edition may vary.
This is a used book - there is no escaping the fact it has been read by someone else and it will show signs of wear and previous use. Overall we expect it to be in very good condition, but if you are not entirely satisfied please get in touch with us.