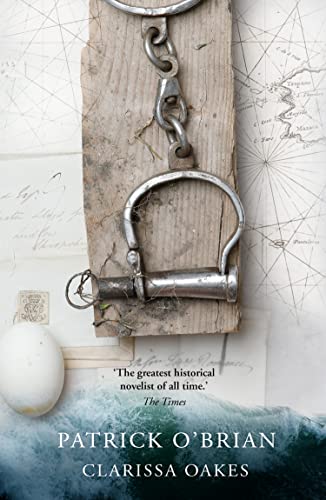 Patrick O'Brian's Aubrey-Maturin tales are widely acknowledged to be the greatest series of historical novels ever written. To commemorate the 40th anniversary of their beginning, with Master and Commander, these evocative stories are being re-issued in paperback with smart new livery. This is the fifteenth book in the series.

Patrick O'Brian's Aubrey-Maturin tales are widely acknowledged to be the greatest series of historical novels ever written. To commemorate the 40th anniversary of their beginning, with Master and Commander, these evocative stories are being re-issued in paperback with smart new livery. This is the fifteenth book in the series.

All the elements that have made Patrick O'Brian's astonishing series one of the most highly praised works in contemporary fiction are here in Clarissa Oakes - the narrative grip, the impeccable ear for dialogue, the humour and the unsurpassed capacity to create and recreate a rich and true friendship between two men in the late eighteenth-century.

Captain Jack Aubrey sails away from the hated Australian prison colonies in his favourite vessel the Surprise, pondering on middle age and sexual frustration. He soon becomes aware that he is out of touch with the mood of his ship: to his astonishment he finds that in spite of a lifetime's experience he does not know what the foremost hands or even his own officers are thinking. They know, as he does not, that the Surprise has a stranger aboard: and what they, for their part, do not know is that the stranger is potentially as dangerous as a light in the powder magazine itself.

NGR9780006499305
Clarissa Oakes by Patrick O'Brian
Patrick O'Brian
New
Paperback
HarperCollins Publishers
1997-03-07
320
0006499309
9780006499305
Winner of Heywood Hill Literary Prize 1995
Book picture is for illustrative purposes only, actual binding, cover or edition may vary.
This is a new book - be the first to read this copy. With untouched pages and a perfect binding, your brand new copy is ready to be opened for the first time.