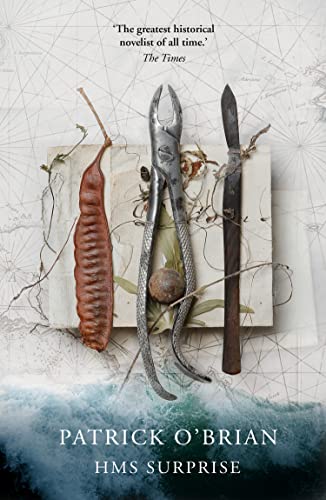 H.M.S. Surprise follows the variable fortunes of Captain Jack Aubrey's career in Nelson's navy as he attempts to hold his ground against admirals, colleagues and the enemy, accepting a mission to convey a British ambassador to the East Indies. The voyage takes him and his friend Stephen Maturin to the strange sights and smells of the Indian sub-continent, and through the archipelago of spice islands where the French have a near-overwhelming superiority.

Rarely has a novel managed to convey more vividly the fragility of a sailing ship in a wild sea. Rarely has a historical novelist combined action and lyricism of style in the way that O' Brian does. His superb sense of place, brilliant characterisation, and a vigour and joy of writing lift O'Brian above any but the most exalted of comparisons.

Patrick O'Brian is unquestionably the Homer of the Napoleonic wars.' James Hamilton- Paterson

GOR001143602
HMS Surprise by Patrick O'Brian
Patrick O'Brian
Used - Very Good
Paperback
HarperCollins Publishers
1996-09-02
416
0006499171
9780006499176
Winner of Heywood Hill Literary Prize 1995
Book picture is for illustrative purposes only, actual binding, cover or edition may vary.
This is a used book - there is no escaping the fact it has been read by someone else and it will show signs of wear and previous use. Overall we expect it to be in very good condition, but if you are not entirely satisfied please get in touch with us.