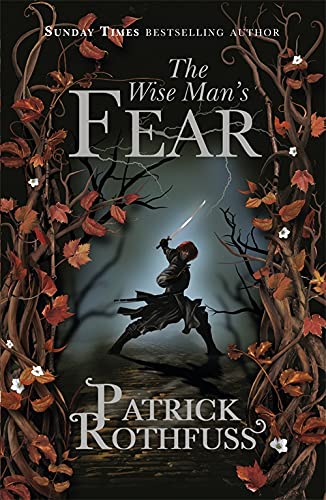 The phenomenal SUNDAY TIMES-bestselling sequel to THE NAME OF THE WIND.
'Hail Patrick Rothfuss! A new giant is striding the land' Robert J Sawyer

'I just love the world of Patrick Rothfuss' Lin-Manuel Miranda

Sequel to the extraordinary THE NAME OF THE WIND, THE WISE MAN'S FEAR is the second instalment of this superb fantasy trilogy from Patrick Rothfuss. This is the most exciting fantasy series since George R. R. Martin's A SONG OF ICE AND FIRE, and a must-read for all fans of HBO's GAME OF THRONES.

Picking up the tale of Kvothe Kingkiller once again, we follow him into exile, into political intrigue, courtship, adventure, love and magic ... and further along the path that has turned Kvothe, the mightiest magician of his age, a legend in his own time, into Kote, the unassuming pub landlord.

Packed with as much magic, adventure and home-grown drama as THE NAME OF THE WIND, this is a sequel in every way the equal to its predecessor and a must-read for all fantasy fans. Readable, engaging and gripping THE WISE MAN'S FEAR is the biggest and the best new fantasy novel out there.

I just love the world of Patrick Rothfuss -- Lin-Manuel Miranda
He's bloody good, this Rothfuss guy -- George R R Martin
Rothfuss has real talent, and his tale of Kvothe is deep and intricate and wondrous -- Terry Brooks
It's not the fantasy trappings (as wonderful as they are) that make this novel so good, but what the author has to say about true, common things, about ambition and failure, art, love, and loss -- Tad Williams
Hail Patrick Rothfuss! A new giant is striding the land -- Robert J. Sawyer, award-winning author of Wake
Jordan and Goodkind must be looking nervously over their shoulders! -- Kevin J. Anderson, New York Times-bestselling author of The Dark Between the Stars
The great new fantasy writer we've been waiting for, and this is an astonishing book -- Orson Scott Card, New York Times-bestselling author of Ender's Game

GOR003731393
The Wise Man's Fear: The Kingkiller Chronicle: Book 2 by Patrick Rothfuss
Patrick Rothfuss
Used - Very Good
Paperback
Orion Publishing Co
2012-03-06
1008
0575081430
9780575081437
Winner of David Gemmell Legend Award 2012
Book picture is for illustrative purposes only, actual binding, cover or edition may vary.
This is a used book - there is no escaping the fact it has been read by someone else and it will show signs of wear and previous use. Overall we expect it to be in very good condition, but if you are not entirely satisfied please get in touch with us.