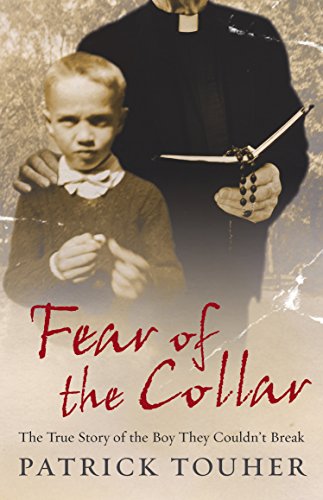 Fear of the Collar
by Patrick Touher

In Stock
3,59 £
Sent to an Industrial School in Dublin at the age of seven, Patrick Touher was forced into a tough regime of education and training, prayer and punishment, strict discipline and fearful nights.
Very Good
10 in stock

Fear of the Collar Summary

Fear of the Collar: The True Story of the Boy They Couldn't Break by Patrick Touher

Sent to an Industrial School in Dublin at the age of seven, Patrick Touher was forced into a tough regime of education and training, prayer and punishment, strict discipline and fearful nights. No allowances were made for emotion, sentiment or boyhood worries, and anyone who disturbed the routine was severely punished. Artane demanded absolute obedience, absolute submission; Patrick's was an education in cruelty and fear. Patrick Touher spent eight long years in Artane Industrial School. Run by the Christian Brothers, the school has become synonymous with the widespread abuse of children in Ireland in the 1940s and 1950s which is currently the subject of an official inquiry. This is the inside story of a childhood lived in the most horrific of circumstances. A moving and powerful true account, Fear of the Collar bears testament to the courage and determination of the children that society forgot.

Fear of the Collar Reviews

"Touher's story powerfully discloses the pain of being without secure moorings in life ... his account of the regime of the Irish Christian Brothers is an important one" * Irish Times *
"It is a book of survival, of hardship, but also of friendships and solidarity despite the oppressive regime all the Artane Boys suffered in a society not willing or able to see its own faults" * Fingal Independent *
"A story ... which must be neither hidden nor forgotten" * Leinster Leader *
"Gripping in its honest and no-holds-barred account of one boy's sometimes tortuous trek through the grey underworld of Dublin's industrial school life during the 1950s" * Northside People *

An orphan, Patrick Touher spent his early years in a foster family before being sent to Artane Industrial School in Dublin at the age of seven. Living there from 1950 to 1958, he was trained as a baker and went into this trade on leaving at sixteen. He spent the 1960s and 70s travelling, and in 1972 he married his late wife Pauline and they had three children together. In 2003, Patrick received a settlement from the Commission to Inquire into Child Abuse and he was finally able to put the past behind him.

GOR000364811
Fear of the Collar: The True Story of the Boy They Couldn't Break by Patrick Touher
Patrick Touher
Used - Very Good
Paperback
Ebury Publishing
2007-07-05
272
0091917662
9780091917661
N/A
Book picture is for illustrative purposes only, actual binding, cover or edition may vary.
This is a used book - there is no escaping the fact it has been read by someone else and it will show signs of wear and previous use. Overall we expect it to be in very good condition, but if you are not entirely satisfied please get in touch with us.