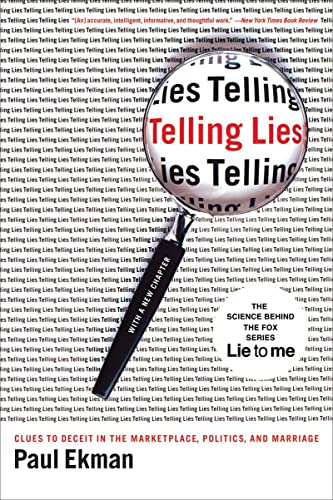 In Stock
£4.99
From breaking the law to breaking a promise, how do people lie and how can they be caught?
Very Good
Only 1 left

Telling Lies: Clues to Deceit in the Marketplace, Politics, and Marriage by Paul Ekman (University of California, San Francisco)

In this revised edition, Paul Ekman, a renowned expert in emotions research and nonverbal communication, adds a new chapter to present his latest research on his groundbreaking inquiry into lying and the methods for uncovering lies. Ekman has figured out the most important behavioral clues to deceit; he has developed a one-hour self-instructional program that trains people to observe and understand "micro expressions"; and he has done research that identifies the facial expressions that show whether someone is likely to become violent-a self-instructional program to train recognition of these dangerous signals has also been developed.

Telling Lies describes how lies vary in form and how they can differ from other types of misinformation that can reveal untruths. It discusses how a person's body language, voice, and facial expressions can give away a lie but still fool professional lie hunters?even judges, police officers, drug enforcement agents, and Secret Service agents.

"[A] wealth of detailed, practical information about lying and lie detection and a penetrating analysis of the ethical implications." -- Jerome D. Frank, The Johns Hopkins School of Medicine

Paul Ekman, director of Paul Ekman Group, is the author of Emotions Revealed, Emotional Awareness (coauthored with the Dalai Lama), and twelve other books. The FOX series Lie to Me was based on his research. A professor emeritus at the University of California, San Francisco, he lives in the Bay area.

GOR004408031
Telling Lies: Clues to Deceit in the Marketplace, Politics, and Marriage by Paul Ekman (University of California, San Francisco)
Paul Ekman (University of California, San Francisco)
Used - Very Good
Paperback
WW Norton & Co
2009-01-26
416
0393337456
9780393337457
N/A
Book picture is for illustrative purposes only, actual binding, cover or edition may vary.
This is a used book - there is no escaping the fact it has been read by someone else and it will show signs of wear and previous use. Overall we expect it to be in very good condition, but if you are not entirely satisfied please get in touch with us.