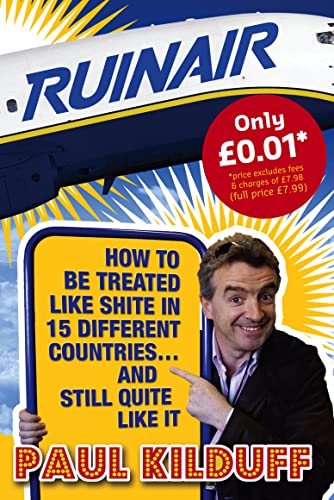 Stung by a ten-hour delay and a not-so-bargain fare to Spain on his native 'low fares' airline, Dubliner Paul Kilduff plots revenge. Can Paul beat 'Ruinair' at their low cost game and fly to all fifteen countries in Western Europe for less than the EURO300 it cost him to be stranded in an airport lounge surrounded by drunks, bimbos and incompetents (and that was just the flight crew!)?

Suffering every low-fares airline indignity: a miniscule carry-on baggage allowance, 6.00 am departures, Six Nations-style boarding scrums, epic bus excursions and terminal anxiety, Paul is doing something he's never done before: travelling to places he never knew he wanted to go, which are probably not quite where he thinks they are, with no idea what he's going to do when he gets there.

In a way never before possible Ruinair and its competitors have opened up Europe's treasures to the average traveller, and, as discovered by Paul, a few complete dumps too. In this hilarious, no-holds-barred account of a holiday of a lifetime-cum-human endurance test, Paul takes us on an adventure that is not for the faint-hearted. From Luxembourg to Liechtenstein to Spain and back again, pack your bags (maximum 10kg, please) and join Paul Kilduff on this is a whirlwind no-frills tour of Europe and the low-cost airlines that help make that colourful continent a smaller, and somewhat angrier, place.

Kilduff has a neat sense of irony when balancing his own and other people's discomfort,with the motivation that brings us all back to Ryanair:it's cheap.He can be a droll and perceptive writer.His dispatches from the hot-spots of Liechtenstein or San Marino are witty and engaging.A quirky study of a modern phenomenon,Ruinair is the ultimate airport book.You may even see it sold on Ryanair flights,if Michael O'Leary can find some way to make a buck from it-Sunday Business Post.

This is a travelogue in the best sense of the word-it captures the tone and the landscape of the changed Europe where we can now fly for a tenner,so that a reader in 100 years' time could quickly visualise the importance of what has happened.Kilduff's strength is the variety of destinations he visits and his contextualisation of the Ryanair experience.Kilduff's style is eminently suitable for an airline that is constantly mocking itself and taking the urine out of the airline industry it has enlivened-Irish Independent

Ruinair is an entertaining travel book based around the destinations you can visit on this much-used but maligned airline.This is a razor sharp travel guide.VERY funny,sure,but be warned,if the book fails to please,there is no refund-Sunday Tribune

GOR001179794
Ruinair by Paul Kilduff
Paul Kilduff
Used - Very Good
Paperback
HarperCollins Publishers
2009-06-01
368
0007306156
9780007306152
N/A
Book picture is for illustrative purposes only, actual binding, cover or edition may vary.
This is a used book - there is no escaping the fact it has been read by someone else and it will show signs of wear and previous use. Overall we expect it to be in very good condition, but if you are not entirely satisfied please get in touch with us.