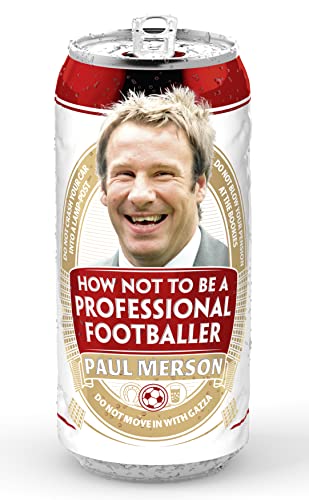 How Not to Be a Professional Footballer
by Paul Merson

An anecdote-driven narrative of the classic footballer's `DOs and DO NOTs' from the ever-popular Arsenal legend and football pundit Paul Merson, aka `The Merse'.

How Not to Be a Professional Footballer Summary

How Not to Be a Professional Footballer by Paul Merson

An anecdote-driven narrative of the classic footballer's `DOs and DO NOTs' from the ever-popular Arsenal legend and football pundit Paul Merson, aka `The Merse'.

When it comes to advice on the pitfalls of life as a professional footballer, Paul Merson can pretty much write the manual. In fact, that's exactly what he's done in this hilarious new book which manages to be simultaneously poignant and gloriously funny.

Merson was a prodigiously talented footballer in the 80s and 90s, gracing the upper echelons of the game - and the tabloid front pages - with his breathtakingly skills and larger-than-life off-field persona.

His much-publicised battles with gambling, drug and alcohol addiction are behind him now, and football fans continue to be drawn to his sharp footballing brain and playful antics on SkySports cult results show Soccer Saturday.

The book delights and entertains with a treasure chest of terrific anecdotes from a man who has never lost his love of football and his inimitable joie de vivre through a 25-year association with the Beautiful Game.

The DO NOTs include:
DO NOT adopt 'Champagne' Charlie Nicholas as your mentor
DO NOT share a house with Gazza
DO NOT regularly place GBP30,000 bets at the bookie's
DO NOT get so drunk that you can't remember the 90 minutes of football you just played in
DO NOT manage Walsall (at any cost)

How Not to be a Professional Footballer is a hugely entertaining, moving and laugh-out-loud funny story.

How Not to Be a Professional Footballer Reviews

When Saturday Comes
"Most football memoirs carefully ration the racy bits as a way of punctuating the otherwise retelling of a career. How Not To Be A Professional Footballer does precisely the opposite."

Zoo
"The best read to fall asleep by the pool with."

Paul Merson was born in Brent, London in 1968. He won two League Championships, an FA Cup trophy and a European Cup-Winner's Cup medal during his 12 years with Arsenal, before his surprise transfer to First Division Middlesbrough in 1997. He was instrumental in the Boro' gaining promotion to the Premiership in 1998/99, but left the club less than a month into the new season to join Aston Villa for GBP6.75 million
During his career he earned 21 full England caps and represented his country at Euro 92 and the 1998 World Cup.

GOR003671858
How Not to Be a Professional Footballer by Paul Merson
Paul Merson
Used - Very Good
Paperback
HarperCollins Publishers
2012-03-01
336
0007424973
9780007424979
N/A
Book picture is for illustrative purposes only, actual binding, cover or edition may vary.
This is a used book - there is no escaping the fact it has been read by someone else and it will show signs of wear and previous use. Overall we expect it to be in very good condition, but if you are not entirely satisfied please get in touch with us.