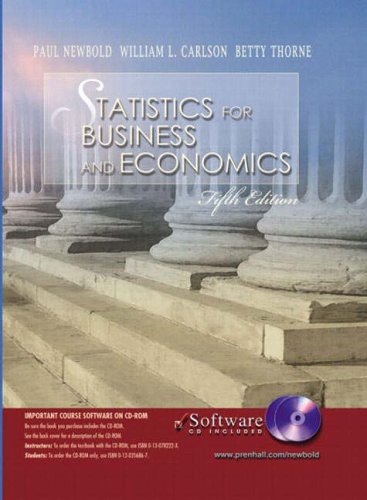 In Stock
£5.49
This new edition focuses on maintaining the statistical integrity of past editions while modernizing the text by integrating the use of statistical software, adding new examples and exercises, and an emphasis on data analysis and interpretation of output. This text features both Excel and Minitab.
Very Good Good Well Read
6 in stock

Statistics for Business and Economics and Student CD-ROM Summary

Statistics for Business and Economics and Student CD-ROM: International Edition by Paul Newbold

For Statistics courses found within Economics, Business, Marketing, or Statistics departments that are required for the Economics or Business major.

Newbold's strength has been its unerring accuracy and statistical precision. It is also at a mathematically higher level than most business statistics texts. This edition focuses on maintaining the statistical integrity of past editions while modernizing the text by integrating the use of statistical software, adding new examples and exercises (many with real data), and an emphasis on data analysis and interpretation of output. The fifth edition features both Excel and Minitab.

Bill Carlson is Professor of Economics and Department Chair of the Economics Department at St Olaf College, where he has taught for 29 years. His education includes engineering degrees from Michigan Technological University (BS) and Illinois Institute of Technology (MS) and a Ph.D. in Quantitative Management from the University of Michigan. His research includes numerous studies related to highway safety, management problems, and statistical education. He has previously published two statistics textbooks. He has led numerous student groups to study in various countries. He enjoys grandchildren, woodworking, travel, reading, and being on assignment in northern Wisconsin.

Betty Thorne. Author, researcher and award-winning teacher, Betty Thorne is Professor and Chair of the Department of Decision and Information Sciences in the School of Business Administration at Stetson University in DeLand, Florida. Winner of Stetson University's McEniry Award for Excellence in Teaching, the highest honor given to a Stetson University faculty member, Dr. Thorne also is the recipient of the Outstanding Teacher of the Year Award and Professor of the Year Award in the School of Business Administration at Stetson. She received her Bachelor of Science degree from Geneva College and the Master of Arts and Ph.D. degrees from Indiana University. She co-authored Applied Statistical Methods for Business, Economics and the Social Sciences (Prentice Hall, 1997) with Bill Carlson. Dr. Thorne is a member of the planning committee and serves as Secretary/Treasurer of the Making Statistics More Effective in Schools and Business conferences where she meets annually with fellow statisticians to discuss research and teaching issues. She also is a member of Decision Sciences Institute, the American Society for Quality, and the American Statistical Association.

She and her husband, Jim, have four children. They travel extensively, enjoy cruising, attend theological classes, and participate in international organizations dedicated to helping disadvantaged children.

GOR001415629
Statistics for Business and Economics and Student CD-ROM: International Edition by Paul Newbold
Paul Newbold
Used - Very Good
Hardback
Pearson Education (US)
2002-03-01
850
0130487287
9780130487285
N/A
Book picture is for illustrative purposes only, actual binding, cover or edition may vary.
The book has been read but remains in clean condition. All pages are intact and the cover is intact. Some minor wear to the spine.