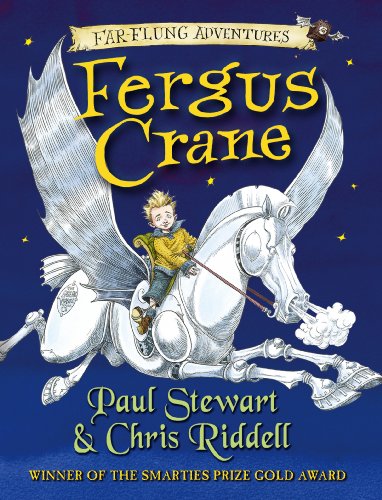 In Stock
£4.49
FERGUS CRANE! C., your long-lost Uncle TheoFergus Crane has an almost ordinary life - having lessons taught by rather odd teachers on the school ship Betty Jeanne, helping his mother in the bakery. But then a mysterious flying box appears at the window of his waterfront home - and Fergus is plunged headlong into an exciting adventure!
Very Good Good
8 in stock

FERGUS CRANE! YOU ARE IN GREAT DANGER! I AM SENDING HELP. Signed T. C., your long-lost Uncle Theo Fergus Crane has an almost ordinary life - having lessons taught by rather odd teachers on the school ship Betty Jeanne, helping his mother in the bakery. But then a mysterious flying box appears at the window of his waterfront home - and Fergus is plunged headlong into an exciting adventure! The box is followed by a winged mechanical horse that whisks him off to meet his long-lost uncle and his penguin helpers, Finn, Bill and Jackson. Fergus finds out that his teachers are not quite what they seem - they're actually pirates! Can Fergus and his winged horse save his schoolmates from the far-off Fire Island? And who else will he find there...?

"Inventive tale, action-packed . . . An irresistable dose of sea-faring escapism" * The Sunday Times *
"Another triumph from the Stewart-Ridell dream team" * Independent *
"This deliciously funny and beautifully lllustrated book will have readers begging for more stories like it . . . Chris Ridell and Paul Stewart have once again collaborated to produce a book which will tickle the imagination of their readers" * Through the Looking Glass *
"A traditional and delightful adventure" * With Kids *
"Move over Harry Potter! Magic and intrigue make this a riveting summer read" * Woman *

Paul Stewart (Author) Paul Stewart is a highly regarded author of books for young readers - everything from picture books to football stories, fantasy and horror. Together with Chris Riddell, he is co-creator of the bestselling Edge Chronicles series, which has sold over three million books and is now available in over thirty languages. They are also co-creators of the Far-Flung Adventure series, which includes Fergus Crane, Gold Smarties Prize Winner, Corby Flood and Hugo Pepper, Silver Nestle Prize Winners, and the Barnaby Grimes Series.Chris Riddell (Author) Chris Riddell is an acclaimed artist of children's books and a political cartoonist for the Observer. Amongst other titles, Chris illustrates the Ottoline young fiction series and the Goth Girl series, as well as working closely with Paul Stewart on the Edge Chronicles and Wyrmeweald. Children's Laureate from 2015-2017, he has won many awards for his work, including the Nestle Gold Award, the UNESCO Award for Something Else and the rare honour of three Kate Greenaway Medals.

GOR000705286
Fergus Crane by Paul Stewart
Paul Stewart
Far-Flung Adventures
Used - Very Good
Paperback
Random House Children's Publishers UK
2005-04-07
240
0440866545
9780440866541
N/A
Book picture is for illustrative purposes only, actual binding, cover or edition may vary.
This is a used book - there is no escaping the fact it has been read by someone else and it will show signs of wear and previous use. Overall we expect it to be in very good condition, but if you are not entirely satisfied please get in touch with us.