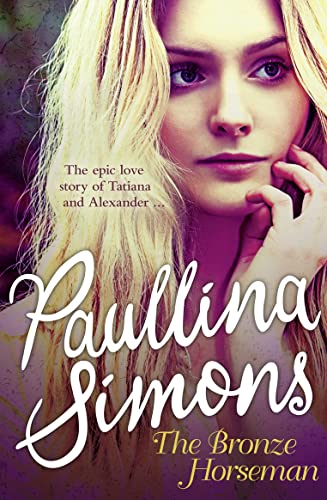 The Bronze Horseman
by Paullina Simons

A magnificent epic of love, war and Russia from the international bestselling author of TULLY and ROAD TO PARADISE

A magnificent epic of love, war and Russia from the international bestselling author of TULLY and ROAD TO PARADISE

Tully
`Pick up this book and prepare to have your emotions wrung so completely you'll be sobbing your heart out one minute and laughing through your tears the next... Read it and weep - literally' Company

Tatiana and Alexander
'This has everything a romance glutton could wish for: a bold, talented and dashing hero, a heart-stopping love affair ... It also has - thank goodness - a welcome sense of humour and discernible characters rather than ciphers.'
Victoria Moore, Daily Mail

The Bronze Horseman
`Pulling off the passionate love story embedded in a truly epic narrative is a difficult thing to do. Margaret Mitchell's Gone With the Wind remains the blueprint for the genre, while Tolstoy's War and Peace carries off the literary honours ... it's quickly apparent that the Russian-born author Paullina Simons has the measure of this kind of epic romantic saga ... She is able to make some powerful statements about the durability of the human spirit, but never at the expense of descriptive passages refulgent with power and beauty' Barry Forshaw, amazon

GOR001188479
The Bronze Horseman by Paullina Simons
Paullina Simons
Used - Very Good
Paperback
HarperCollins Publishers
2001-03-28
656
0006513220
9780006513223
N/A
Book picture is for illustrative purposes only, actual binding, cover or edition may vary.
This is a used book - there is no escaping the fact it has been read by someone else and it will show signs of wear and previous use. Overall we expect it to be in very good condition, but if you are not entirely satisfied please get in touch with us.