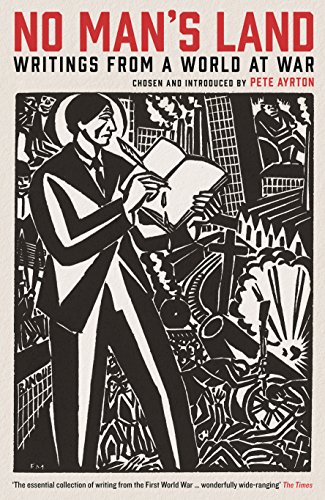 No Man's Land
by Pete Ayrton

No Man's Land: Writings from a World at War by Pete Ayrton

The Great War gave birth to some of the twentieth century's most celebrated writing; from Brooke to Sassoon, the poetry generated by the war is etched into collective memory. But it is in prose fiction that we find some of the most profound insights into the war's individual and communal tragedies, the horror of life in the trenches and the grand farce of the first industrial war. Featuring forty-seven writers from twenty different nations, representing all the main participants in the conflict, No Man's Land is a truly international anthology of First World War fiction. Work by Siegfried Sassoon, Erich Maria Remarque, Willa Cather and Rose Macaulay sits alongside forgotten masterpieces such as Stratis Myrivilis' Life in the Tomb, Raymond Escholier's Mahmadou Fofana and Mary Borden's The Forbidden Zone. No Man's Land is a brilliant memorial to the twentieth century's most cataclysmic event.

Splendid ... the war, in all its calculated cruelty, its human impact, its formidable weapons of death and destruction and - yes - its futility, is captured brilliantly in this remarkable, wide-ranging anthology -- Russell Leadbetter * Herald *
An impressive anthology that bears an extraordinary cargo of human experience...an enlightenment for those who think only of the Western Front when they remember the First World War * Financial Times *

Pete Ayrton was born in London in 1943. After studying and briefly teaching philosophy, a period of left-wing tourism in France and Italy led to his learning to read and converse in these languages, and to take part in the intense, opaque discourses of Marxism. A period of work as translator led to a job as editor with Pluto Press and to his founding in 1986 of Serpent's Tail with the specific remit of publishing fiction in translation; this includes two First World War classics Frederic Manning's Her Privates We and Gabriel Chevallier's Fear, both represented in No Man's Land.

GOR007921545
No Man's Land: Writings from a World at War by Pete Ayrton
Pete Ayrton
Used - Very Good
Paperback
Profile Books Ltd
2015-01-01
576
1846689260
9781846689260
N/A
Book picture is for illustrative purposes only, actual binding, cover or edition may vary.
This is a used book - there is no escaping the fact it has been read by someone else and it will show signs of wear and previous use. Overall we expect it to be in very good condition, but if you are not entirely satisfied please get in touch with us.