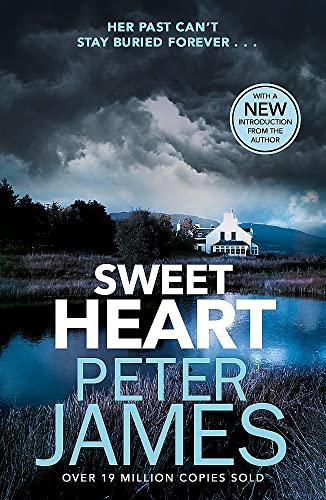 Charley has a strange feeling when she sees the idyllic mill house with its cluster of outbuildings, the lake and the swirling mill stream; a powerful sense of recognition, as if she has been there before. Except she knows she hasn't.

After Charley and her husband Tom move into Elmwood Mill, sinister memories of a previous existence start to haunt her. Despite both their attempts to dismiss everything with rational explanations, the feeling turns to certainty as the memories become increasingly vivid and terrifying.

Charley is persuaded to undergo hypnosis - but in searching deep into her past, she will soon fear her future.

'James has been compared with Stephen King, but in many ways he's better.' Daily Express

'Peter James is getting better with every book.' Times

GOR009242942
Sweet Heart by Peter James
Peter James
Used - Very Good
Paperback
Orion Publishing Co
2018-07-26
352
1409181294
9781409181293
N/A
Book picture is for illustrative purposes only, actual binding, cover or edition may vary.
This is a used book - there is no escaping the fact it has been read by someone else and it will show signs of wear and previous use. Overall we expect it to be in very good condition, but if you are not entirely satisfied please get in touch with us.