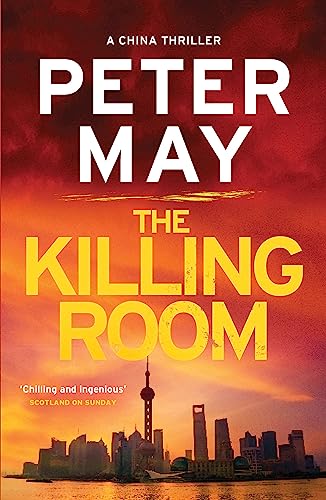 The Killing Room
by Peter May

In Stock
£3.99
Li Yan and Margaret Campbell travel to Shanghai: where a new ally, and a new enemy, await.
Very Good Good Well Read
29 in stock

The Killing Room: A gripping thriller and a tense hunt for a killer (China Thriller 3) by Peter May

PETER MAY: OVER 3 MILLION COPIES SOLD
FROM THE AUTHOR OF COFFIN ROAD, ENTRY ISLAND AND I'LL KEEP YOU SAFE
'CHILLING AND INGENIOUS' SCOTLAND ON SUNDAY
'THE PLOT TWISTS AND TURNS LIKE THE TAIL OF A CHINESE DRAGON' SHOTS MAGAZINE

In the third of the critically acclaimed China thrillers, Li Yan and Margaret Campbell travel to Shanghai: where a new ally, and a new enemy, await.

When a mass grave containing eighteen mutilated female corpses is discovered in Shanghai, detective Li Yan is sent from Beijing to establish if the bodies are linked to an unsolved murder in the capital. Here, Li will be working with Mei Ling, deputy head of Shanghai's serious crime squad.

Mei Ling is a formidable woman: a fact that is not lost on Li's on-off lover, forensic pathologist Margaret Campbell. But when Campbell, vulnerable and still grieving the loss of her father, learns that the victims were subjected to 'live' autopsies, she knows the case is bigger than her pride.

Li, Campbell and Mei Ling are now entering the arena of a sickening nemesis, and opening a door behind which lies each of their very worst nightmares.

LOVED THE KILLING ROOM? Read the next book in the China series, SNAKEHEAD
LOVE PETER MAY? Order his new thriller, A SILENT DEATH

A wonderfully complex book * Peter James, on Entry Island *
He is a terrific writer doing something different -- Mark Billingham
From the first page I knew I was in safe hands. I knew I could trust this writer -- Sophie Hannah
Wonderfully compelling -- Kate Mosse
A true pleasure to read -- Guardian
Peter May is a writer I'd follow to the ends of the earth * New York Times *
One of the best regarded crime series of recent years -- Boyd Tonkin, on the Lewis trilogy * Independent *
Lyrical, empathetic and moving -- Alex Gray
May's novels are strong on place and the wounds left by old relationships * Sunday Times *
Will have the reader relishing every tendency of description and characterization -- Barry Forshaw * Independent *
Dark, exciting and atmospheric * Scotland on Sunday *
Powerful and authentic * Glasgow Sunday Herald *
A gripping page-turner that combines edge-of-the-seat suspense with a fascinating picture of modern China * Irish Independent *
The plot is chilling and ingenious * Scotland on Sunday *
Peter May opens a window on a vision of the modern Chinese political climate ... a tremendous collision of cultures * The Herald *
Fast, exciting ... an entertaining read that will also give food for thought * Irish Times *
The plot twists and turns like the tail of a Chinese dragon. A cracking good read ... Highly recommended * Shots Magazine *

GOR007898082
The Killing Room: A gripping thriller and a tense hunt for a killer (China Thriller 3) by Peter May
Peter May
China Thrillers
Used - Very Good
Paperback
Quercus Publishing
2016-11-17
496
1784291684
9781784291686
N/A
Book picture is for illustrative purposes only, actual binding, cover or edition may vary.
This is a used book - there is no escaping the fact it has been read by someone else and it will show signs of wear and previous use. Overall we expect it to be in very good condition, but if you are not entirely satisfied please get in touch with us.