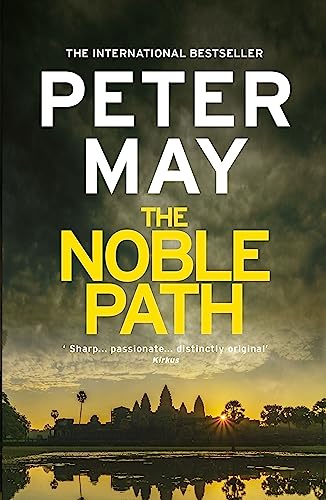 The Noble Path
by Peter May

The Noble Path: A relentless standalone thriller from the #1 bestseller by Peter May

PETER MAY: OVER 3 MILLION COPIES SOLD
'A TRUE PLEASURE TO READ' GUARDIAN
'A TERRIFIC WRITER' MARK BILLINGHAM
'A WRITER I'D FOLLOW TO THE ENDS OF THE EARTH' NEW YORK TIMES

Cambodia, 1978. Amid the Khmer Rouge's crazed genocide, soldier-of-fortune Jack Elliott is given the impossible task of rescuing a family from the regime.

Eighteen-year-old orphan and budding journalist Lisa Robinson has received the impossible news that her father is, in fact, alive. His name - Jack Elliott.

As Jack tracks the hostages and Lisa traces her heritage, each is intent on reuniting a family. Yet to succeed, so must run a dangerous gauntlet of bullets and betrayal.

Praise for The Noble Path

"Peter May's The Noble Path addresses the rippling damage caused by war - to those who do the killing as well as those killed - and later attempts at redemption."--Book Loons

Praise for Peter May
"Richly written . . . May's sense of place is as good as it gets."--Kirkus Reviews
"May keeps the stories clear and the pace fast."--Booklist, (starred review)
"May's lyrical prose brings full color to the scenery, and the narrative intrigues from start to finish."--Shelf Awareness
"No one can create a more eloquently written suspense novel than Peter May. His prose evokes a setting that is almost mystical in its untamed beauty."--New York Journal of Books
"Peter May is a writer I'd follow to the ends of the earth."--Marilyn Stasio, The New York Times

Peter May was born and raised in Scotland. He was an award-winning journalist at the age of twenty-one and a published novelist at twenty-six. When his first book was adapted as a major drama series for the BCC, he quit journalism and during the high-octane fifteen years that followed, became one of Scotland's most successful television dramatists. He created three prime-time drama series, presided over two of the highest-rated serials in his homeland as script editor and producer, and worked on more than 1,000 episodes of ratings-topping drama before deciding to leave television to return to his first love, writing novels. He has won several literature awards in France, received the USA's Barry Award for The Blackhouse, the first in his internationally bestselling Lewis Trilogy; and in 2014 was awarded the ITV Specsavers Crime Thriller Book Club Best Read of the Year award for Entry Island. Peter now lives in South-West France with his wife, writer Janice Hally.

GOR010176890
The Noble Path: A relentless standalone thriller from the #1 bestseller by Peter May
Peter May
Used - Very Good
Paperback
Quercus Publishing
2019-10-29
544
1787477959
9781787477957
N/A
Book picture is for illustrative purposes only, actual binding, cover or edition may vary.
This is a used book - there is no escaping the fact it has been read by someone else and it will show signs of wear and previous use. Overall we expect it to be in very good condition, but if you are not entirely satisfied please get in touch with us.