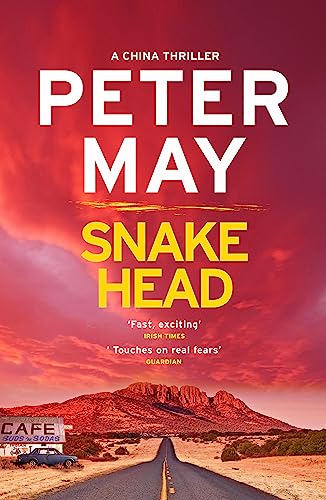 Snakehead
by Peter May

Snakehead: The heart-stopping China series travels to America (China Thriller 4) by Peter May

FROM THE AUTHOR OF THE LEWIS TRILOGY AND THE ENZO THRILLERS
'FAST, EXCITING' IRISH TIMES
'AN EXCELLENT SERIES' KIRKUS
PETER MAY: OVER 3 MILLION COPIES SOLD

A vehicle crammed with dozens of dead Chinese immigrants is found in southern Texas. Pathologist Margaret Campbell must put aside her horror, and find out why.

Detective Li Yan - an even more unwelcome memory for Campbell - has arrived stateside to investigate a link in the case to a lucrative trade in illegal labourers.

LOVED SNAKEHEAD? Read the fifth book in the series, THE RUNNER
LOVE PETER MAY? Buy his new thriller, A SILENT DEATH

A wonderfully complex book * Peter James, on Entry Island *
He is a terrific writer doing something different * Mark Billingham *
From the first page I knew I was in safe hands. I knew I could trust this writer * Sophie Hannah *
Wonderfully compelling * Kate Mosse *
A true pleasure to read * Guardian *
Peter May is a writer I'd follow to the ends of the earth * New York Times *
One of the best regarded crime series of recent years -- Boyd Tonkin on the Lewis Trilogy * Independent *
Lyrical, empathetic and moving -- Alex Gray
May's novels are strong on place and the wounds left by old relationships * Sunday Times *
Will have the reader relishing every tendency of description and characterization -- Barry Forshaw * Independent *
Dark, exciting and atmospheric * Scotland on Sunday *
Powerful and authentic * Glasgow Sunday Herald *
A gripping page-turner that combines edge-of-the-seat suspense with a fascinating picture of modern China * Irish Independent *
The plot is chilling and ingenious * Scotland on Sunday *
Peter May opens a window on a vision of the modern Chinese political climate ... a tremendous collision of cultures * The Herald *
Fast, exciting ... an entertaining read that will also give food for thought * Irish Times *
The plot twists and turns like the tail of a Chinese dragon. A cracking good read ... Highly recommended * Scots Magazine *
The characters here are vivid and contrasting, and they grow and develop in a way usually only found in literary novels, and the plotting and evocation of atmosphere as professional as they come. An excellent series * Kirkus Reviews *
A tense and atmospheric thriller with a heart-stopping ending * Tangled Web *

GOR008272094
Snakehead: The heart-stopping China series travels to America (China Thriller 4) by Peter May
Peter May
China Thrillers
Used - Very Good
Paperback
Quercus Publishing
2017-04-06
416
1782062327
9781782062325
N/A
Book picture is for illustrative purposes only, actual binding, cover or edition may vary.
The book has been read, but looks new. The book cover has no visible wear, and the dust jacket is included if applicable. No missing or damaged pages, no tears, possible very minimal creasing, no underlining or highlighting of text, and no writing in the margins.