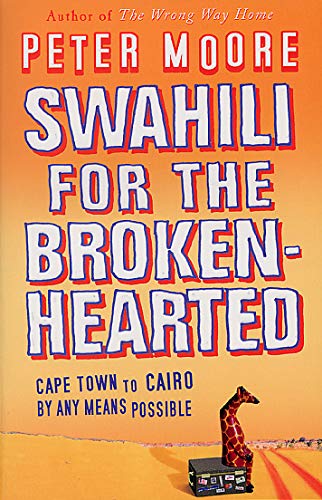 Swahili For The Broken-Hearted
by Peter Moore

In Stock
£3.59
In the grand tradition of 19th-century scoundrels and romantics, Africa struck Peter Moore as the ideal place to find solitude and anonymity in the face of personal crisis. This is his account of heartbreak, hyenas and misplaced penguins as he travels from Cape to Cairo.
Very Good Good
7 in stock

Swahili For The Broken-Hearted Summary

Swahili For The Broken-Hearted by Peter Moore

Question: What do you do when you're dumped by the Girl Next Door? Answer: Throw yourself into another madcap adventure and travel from Cape Town to Cairo... A week after breaking up with the GND (his travelling companion through Central America) Peter Moore heads off to Africa to lose himself for a while. In the grand tradition of 19th-century scoundrelas, explorers and romantics, Africa strikes him as the ideal place to find solitude and anonymity in the face of a personal crisis. What follows is Peter's journey from one end of the Dark Continent to the other. Travelling the fabled Cape Town to Cairo route by any means of transport he can blag (or if he must, pay) his way onto, it's an epic trek that sees our intrepid Antipodean experience everything from the southernmost city in Africa to the Pyramids, vast game parks and thundering falls, cosmopolitan cities and tiny villages as he journeys through the very heart of Africa. And travelling on his own, it's inevitable that Peter falls in with a motley cast of characters and has a myriad misadventures: including coming face to face with a wild Hyena with very bad breath, crossing the treacherous Sani Pass, the highest in Africa, narrowly escaping a riot by hiding in a coffin shop, saving oil-covered Penguins in South Africa, acting as an extra in a WW2 epic, not to mention dodging 20,000 single woman trying to catch the eye of the king of Swaziland during the annual Reed Dance. And then there was the time when he was kicked out of Robert Mugabe's birthday bash at gunpoint...

Swahili For The Broken-Hearted Reviews

"'Moore captures the spirit of contemporary Africa. Brilliant.'" * Good Book Guide *
"'An entertaining armchair read.'" -- Angus Clarke * The Times *
"'Moore has a parched dry wit, the solid brass cojones of a true traveller and a rare eye for the madness of the wider world'" -- John Birmingham
"'Relayed with his dryer-than-the-Sahara wit.'" * OK Magazine *
"'A first-class guide for armchair travellers everywhere.'" * Mail on Sunday *

Peter Moore is an itinerant hobo who is lucky enough to be able to support his insatiable travel habit (he has visited 92 countries so far) through writing. His other acclaimed travel books are The Wrong Way Home, The Full Montezuma, Vroom with a View and the bestselling alternative travel guide, No Shitting in the Toilet. He currently lives in London, but does miss his collection of souvenir plastic snowdomes and Kinder Surprise toys which are in Sydney.

GOR001133386
Swahili For The Broken-Hearted by Peter Moore
Peter Moore
Used - Very Good
Paperback
Transworld Publishers Ltd
2003-05-01
352
0553814524
9780553814521
N/A
Book picture is for illustrative purposes only, actual binding, cover or edition may vary.
This is a used book - there is no escaping the fact it has been read by someone else and it will show signs of wear and previous use. Overall we expect it to be in very good condition, but if you are not entirely satisfied please get in touch with us.