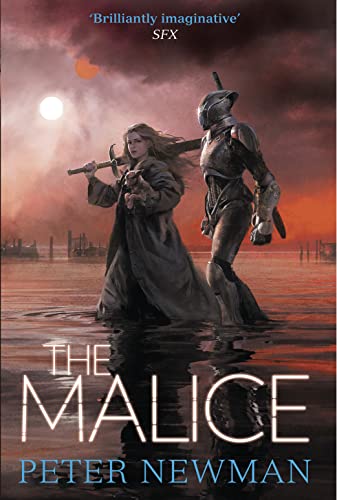 The Malice
by Peter Newman

`The Malice was entertaining and riveting, with almost never a dull moment. ...Do yourself a favour, buy this book. And the first one, too, if you don't already own it. You will regret nothing.' Geeks of Doom

The Malice (The Vagrant Trilogy) by Peter Newman

`The Malice was entertaining and riveting, with almost never a dull moment. ...Do yourself a favour, buy this book. And the first one, too, if you don't already own it. You will regret nothing.' Geeks of Doom

In the south, the Breach stirs.

Gamma's sword, the Malice, wakes, calling to be taken to battle once more.

But the Vagrant has found a home now, made a life and so he turns his back, ignoring its call.

The sword cries out, frustrated, until another answers.

Her name is Vesper.

Reviews of THE VAGRANT:

'For fans of classic science-fiction literature, this is a must-read.' - SciFi Now

`The Vagrant is a joy to read: an original and engrossing world, a strong story and a protagonist who is intensely charismatic despite - or because of - his silence. Newman's debut is written with confidence, flair and imagination, bringing his dark world to marvellously macabre life'
Adrian Tchaikovsky, Author of Shadows of the Apt series

`A stunning and ambitious debut novel set in a unique and imaginative world where the only hope rests on the capacity of human beings to love' Melinda M. Snodgrass

PETER NEWMAN is the author of the critically acclaimed, award-winning Vagrant Trilogy: The Vagrant, The Malice, The Seven. He sometimes pretends to be a butler for the Tea and Jeopardy podcast, which he co-writes and for which he won a Hugo Award in 2017. His first book, The Vagrant, won the David Gemmell Morningstar Award in 2016 for best Fantasy Debut of the Year. Peter writes for George R.R. Martin's Wild Cards series and will first appear in Knaves Over Queens. He has also written for the computer game Albion Online. He lives in Somerset.

GOR008244138
The Malice (The Vagrant Trilogy) by Peter Newman
Peter Newman
The Vagrant Trilogy
Used - Very Good
Paperback
HarperCollins Publishers
2017-03-09
464
0007593198
9780007593194
N/A
Book picture is for illustrative purposes only, actual binding, cover or edition may vary.
This is a used book - there is no escaping the fact it has been read by someone else and it will show signs of wear and previous use. Overall we expect it to be in very good condition, but if you are not entirely satisfied please get in touch with us.